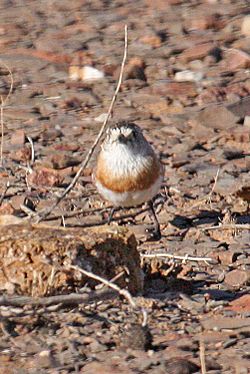 Bulgunnia is an important area for the chestnut-breasted whiteface

It lies 175 kilometres (109 mi) south-west of Coober Pedy and about 750 kilometres (466 mi) north-west of the state capital, Adelaide. It carries 26,000 merinos and is operated with a staff of seven people. It is one of four adjoining properties operated by the Jumbuck Pastoral Company in the region. The climate at Bulgunnia is arid, with an annual average rainfall of 160 millimetres (6 in) and with daytime maximum temperatures ranging from about 18 °C in winter to the 40s in summer. In 2011 the area experienced heavy flooding with the managers, Shane and Cheryl Miller, having to grade a new road to access groceries after becoming isolated for a few days.

The land occupying the extent of the Bulgunnia Station pastoral lease was gazetted as a locality in April 2013 under the name 'Mount Eba'.

Bulgunnia has been classified by BirdLife International as an Important Bird Area because it is a stronghold for the restricted-range and near-threatened chestnut-breasted whiteface as well as supporting the biome-restricted inland dotterel, Bourke's parrot, chiming wedgebill, cinnamon quail-thrush, pied honeyeater and thick-billed grasswren.

All content from Kiddle encyclopedia articles (including the article images and facts) can be freely used under Attribution-ShareAlike license, unless stated otherwise. Cite this article:
Bulgunnia Station Facts for Kids. Kiddle Encyclopedia.