The thick-billed grasswren (Amytornis modestus) is a species of bird in the family Maluridae. It is endemic to Australia. Its natural habitat is Mediterranean-type shrubby vegetation.

The thick-billed grasswren was formerly considered as conspecific with the western grasswren until split as a separate species in 2010.

While not completely accepted by all authourities, the following seven subspecies are recognized by Clements and the IOC: 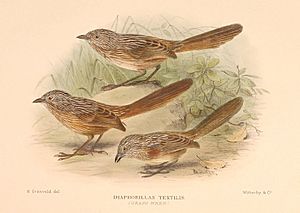 The thick-billed grasswren has dull brown underparts, a long dark-brown tail and noticeable white streaking on the head. It has white streaks continuing down the neck, throat and down to the rump. The white streaks across the chin to the forehead and along the wings and rump, contrast with the red-brown to grey colours of the feathers. Males have distinguishably longer tails. Females also have chestnut flanks. Vocals are a combination of short high-pitched song, repeated. They have a soft, high-pitched call that is often inaudible to human ears.

The thick-billed grasswren is endemic to Australia and is found throughout the arid regions of northwestern New South Wales (NSW), northern parts of South Australia, through to southern sections of the Northern Territory. It is also speculated to still occur in fragmented populations in the Grey Range of Sturt National Park.

Thick-billed grasswrens are usually sedentary, with these elusive birds seen running, hopping or rarely flying, between vegetative cover to remain undetected. They can also be seen foraging for food at ground level around vegetation. Wrens have a generalist beak type that allows them to eat a range of foods. The thick bill allows for tougher seeds and other food niches to be accessed, compared with the smaller fairy wren species. If disturbed, individuals take refuge in any existing cover – usually vegetation or piles of old flood debris along dry sandy watercourses and even down rabbit burrows. They are often seen solitarily or in pairs. Sources vary, but mating pairs maintain between five, and 20 to 40 hectare territories year-round and rarely, possibly never, band with their neighbours outside the breeding season. Family groups are sometimes seen during the post-fledgling period, while the young are still dependent on their parents. The feather patterns/markings imitate their preferred habitat as a form of camouflage.

Breeding occurs between July and September. Nests can usually be seen in low branches in saltbush, can-grass and other similar vegetation. The nest composes of loose grass and bark in the shape of a half dome, with finer grass, fur, feathers lining the nest. One to three (usually two) eggs of various colourings of white, cream and pink; with blotches of red-brown or purplish grey. They have an incubation period of two weeks and fledge in 10–12 days. The estimated generation length of the thick-billed grasswren is four years .

The thick-billed grasswren eats mainly insects and other small invertebrates, as well as plant seeds and berries.

The main threat to thick-billed grasswrens is loss of habitat through clearing and overgrazing by hard hooved animals, such as sheep and goats that trample the vegetation. This reduces the area and quality of the habitat that the thick-billed grasswren prefer. Particularly the larger shrubs that provide prime habitat for breeding. Habitat modification has also occurred due to rabbits. Feral species, such as foxes and cats are major threats due to predation. All threats have been compounded by droughts over the past decade.

High frequency wildfires are also a threat to the quality of habitat. Higher frequency of fires disrupts the life cycle processes of the thick-billed grasswren, as well as the plants and macroinvertebrates that they depend on. Changes in expected environmental conditions, will also challenge tolerance ranges and exacerbate the impacts of existing threats to the species.

All content from Kiddle encyclopedia articles (including the article images and facts) can be freely used under Attribution-ShareAlike license, unless stated otherwise. Cite this article:
Thick-billed grasswren Facts for Kids. Kiddle Encyclopedia.