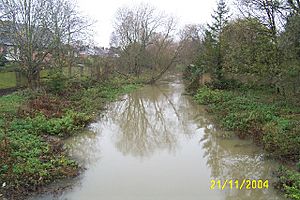 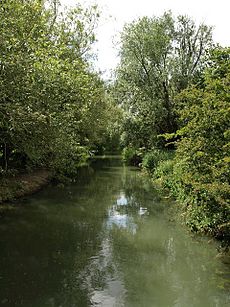 Another view of Bulstake Stream.

The stream leaves the main stream of the Thames at a river junction known as Four Rivers, at the south west corner of Fiddler's Island opposite Sheepwash Channel. It immediately flows past Tumbling Bay, which had a bathing place in use from 1853 to 1990. Osney Ditch flows out of the stream southeast towards Osney. The stream follows a semi-circular course, west and then south, passing under bridges on Binsey Lane and Botley Road (Bulstake Bridge) to a confluence with Seacourt/Hinksey Stream near North Hinksey. It resumes, east, past Osney Mead Industrial Estate, and rejoins the Thames at the Osney Rail Bridge. The Thames Path crosses the stream on a bridge known as Boney's Bridge. Botley Stream flows into it from Seacourt Stream just north of Botley Road.

The lower part (resumption) is also known as Potts Stream or Pot Stream.

Until 1790, the stream was the main navigation channel of the Thames. It became a backwater when Osney Lock was opened.

All content from Kiddle encyclopedia articles (including the article images and facts) can be freely used under Attribution-ShareAlike license, unless stated otherwise. Cite this article:
Bulstake Stream Facts for Kids. Kiddle Encyclopedia.