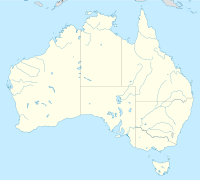 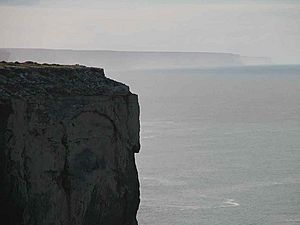 The Bunda Cliffs, seen from east of Eucla

The Bunda cliffs are part of a larger scarp of the Eucla Basin that spreads from the western part of South Australia across to the south eastern corner of Western Australia. As a geographical feature, they form part of the longest uninterrupted line of sea cliffs in the world. No other continent or country can match the cliffs for length of coastline.

The Bunda cliffs is an aboriginal name which has been used in South Australia for the name of the Nullarbor coastal cliffs. The name was gazetted by the Government of South Australia on 2 October 2014 in response to a submission from the Department of Environment, Water and Natural Resources for approval to use the name for a sanctuary zone in the Far West Coast Marine Park and refers to the extent of cliff line extending from the Western Australian border to the Head of the Bight.

The Bunda cliffs extend for around 100 kilometres (62 mi) along the Great Australian Bight near its northern extremity and are close to the Nullarbor Plain in a very sparsely settled area of Australia.

Geologically the cliffs are of Tertiary age and are composed of fossiliferous limestone. The same formation can be seen from Eucla to Madura, where it forms a scarp separating the Roe Plains from the Hampton Tableland, but in this section the coastline has moved away from the cliffs. The scarp in this area runs parallel to, and within sight of, the Eyre Highway.

A Western Australian section of the Bunda Cliffs, the Baxter Cliffs, are at a location identified by Geoscience Australia. They run between Toolinna Cove and Twilight Cove. They are named after a companion of the explorer Edward John Eyre, John Baxter, who was murdered there by two Aboriginals from Eyre's exploration party in April 1841.

All content from Kiddle encyclopedia articles (including the article images and facts) can be freely used under Attribution-ShareAlike license, unless stated otherwise. Cite this article:
Bunda cliffs Facts for Kids. Kiddle Encyclopedia.