Bunk'd is an American comedy television series created by Pamela Eells O'Connell that premiered on Disney Channel on July 31, 2015. The series is a spinoff of Jessie and for the first three seasons includes returning stars Peyton List, Karan Brar, and Skai Jackson, as well as Miranda May who has starred over the series' entire run. In February 2020, the series was renewed for a fifth season.

Emma, Ravi, and Zuri leave New York City and head off to Moose Rump, Maine, to spend the summer at Camp Kikiwaka, where their parents met as teenagers. The Ross children and their new friends try their best to adapt to their lives at the camp, which was founded by Jedediah Swearengen and is named after a legendary Bigfoot-like creature that lives in the nearby forest. The camp has a notorious reputation of staying open despite violating various health code and safety regulations.

In "We Didn't Start the Fire", several cabins are destroyed by a fire after a candle is left unattended. In "We Can't Bear It", the Ross children return with a new generation of campers to find the cabins were never rebuilt and Gladys ran away with the insurance money. These children include pageant girl Destiny, cautious boy Mateo, and Lou's messy second cousin Finn. The Ross children then convince their parents to buy Camp Kikiwaka and put them in charge. Eventually, Emma, Ravi, and Zuri agree to sell the camp to Lou while they go pursue their dream jobs. In "Who da Boss? Lou da Boss!" Lou is now in charge of Camp Kikiwaka. While Lou gains Ava and Noah as fellow counselors, Destiny, Mateo, and Finn gain Gwen as a fellow camper.

The season five episode "R.V. Having Fun Yet" introduces a new character named Parker Preston who is the great-grandson of Jedediah's partner Old Man Preston who co-owned the Camp Kikiwaka in the past. Now Parker has arrived to become the co-owner and improve Camp Kikiwaka in appearance and camper attendance. 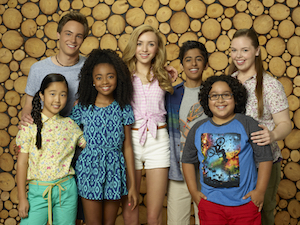 The series is a spinoff of Jessie. Bunk'd was renewed for a second season by Disney Channel on February 29, 2016. The second season premiered on August 23, 2016.

The series was renewed for a third season by Disney Channel on August 31, 2017. On June 1, 2018, it was announced that Peyton List, Karan Brar, Skai Jackson, and Miranda May would be returning for the third season and that Raphael Alejandro, Will Buie Jr., and Mallory Mahoney would be joining the cast. The third season premiered on Disney Channel on June 18, 2018. In March 2018, actress Skai Jackson stated in an interview that she was leaving Disney and that Bunk'd would end with the third season. In September 2018, it was confirmed in a report from The Hollywood Reporter that Peyton List would also leave the series after the conclusion of its third season.

All content from Kiddle encyclopedia articles (including the article images and facts) can be freely used under Attribution-ShareAlike license, unless stated otherwise. Cite this article:
Bunk'd Facts for Kids. Kiddle Encyclopedia.