In 1927, 40 acres of Evansville land were purchased by the Everett Burdette American Legion Post 187. The Post had been discussing plans to create a recreational facility for legionnaires and their families, deciding ultimately upon this plot 10 minutes west of their post in Howell. The site was chosen for its landscape and natural springs; the salt spring, in particular, would figure prominently in the development of the Legion’s future park.

Work began at the site in April, 1928. Legionnaires volunteered their time and money to help with the preliminary clearing and the construction of the “Clubhouse,” a two-story facility that still stands in the park today. In December, 1931, Post 187 formed a non-profit committee of several of their own members to operate the park; by 1933, more than 3,000 patrons were visiting the park weekly. 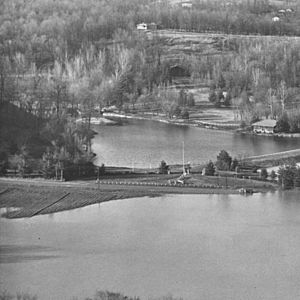 Burdette Park suffers damage during the Ohio River flood of 1937.

Development of the park continued through the Great Depression thanks to public works programs such as WPA, CWA, and FERA. The Legion deeded the park to Vanderburgh County in 1934 to qualify for these programs, which provided funding and much needed manpower. Later that same year, the Post’s non-profit committee was absorbed into the County’s “Burdette Park Association,” which would govern the park through the cooperation of the Legion and county officials. The association held formal ceremonies in 1936 to open Burdette Park to the general public, to which approximately 15,000 people were in attendance. When the city of Evansville was hit by the Ohio River flood of 1937, Burdette Park suffered extensive damage. Cleanup efforts allowed the park to open that summer, and $300,000 were provided through Vanderburgh County and WPA for major expansion and renovation that took place in 1938.

Park attendance declined during World War II. Plans began in 1945 to renovate existing facilities and to construct a new dance pavilion, which was finished in 1946. While Burdette Park enjoyed several good post-war years, revenues again began to decline in 1948, continuing to do so through 1950. The Burdette Park Association required $5,000 from the county to make necessary repairs to the salt pool and the roller-skating rink before the park could open that year; the association notified Vanderburgh County that it would no longer be able to operate Burdette Park after the year ended.

The county agreed to take over operations, and in March, 1951, the Vanderburgh County Park Board was created. The change in management, along with the advent of daylight saving time, was expected to boost revenues for the park. In 1954, however, the salt well that fed into Burdette Park’s salt pool began to go dry; constant maintenance was required to keep the pool open and operating according to Health Department standards. By 1956, plans were being discussed for extending city water service to Burdette Park.

Park attendance had declined again by 1959 due to worsening conditions at the salt pool. The Vanderburgh County Park Board worked in cooperation with the city of Evansville to extend an 11,000 foot waterline to the park, making it possible to move forward on plans to construct a new swimming facility, fresh water facilities, and sewage facilities. A $300,000 bond issue was approved in 1960 to begin construction on an Olympic size swimming facility to replace the salt pool. The new pool opened on August 19, 1961, and remains one of the largest swimming facilities in the Midwest. 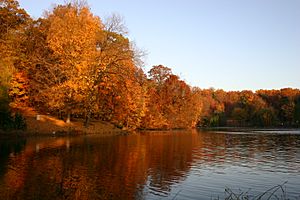 The Aquatic Center opened to the public on August 19, 1961. It features an Olympic-size swimming pool with two diving boards, four waterslides, a family pool and a children’s pool. In May, 2006, work was completed on an interactive spray park. Two rentable party rooms are available on the upper level of the pool office building.

On May 30, 2003, this $2.1 million facility officially opened to the public. The O’Day Discovery Lodge was designed by Morley and Associates and constructed by Arc Construction Co. The 16,000 square foot building is a log and timber frame structure “wrapped” in hand-hewn log veneer.

In 2005, the University of Southern Indiana collaborated with Burdette Park to begin plans for a paved, three-mile trail that would eventually link the two properties. Construction began in 2007 and continued until 2012; in August of that year, the $2.6 million trail project was officially finished. The Burdette Park Discovery Trail is a designated destination point on the American Discovery Trail, and was named a National Recreation Trail by the Secretary of the Interior in 2008.

In January 2014, local artist and retired University of Southern Indiana art instructor John McNaughton completed work on the “Upside-Down House,” the fourth in a series of architectural works of art that have been constructed around the country.

In 1977, George Mason led Burdette Park in the planning and construction of a 1,400 foot, world-class BMX track that would later be considered “one of the best, fastest BMX tracks in the nation.” This fenced-track facility has hosted many racing events since its beginning, including Indiana state-level races, Midwest regionals and nationals, 3-day events, and even the Grand Nationals in 1980.

All content from Kiddle encyclopedia articles (including the article images and facts) can be freely used under Attribution-ShareAlike license, unless stated otherwise. Cite this article:
Burdette Park Facts for Kids. Kiddle Encyclopedia.