Southwestern Indiana is an 11-county region of southern Indiana, United States located at the southernmost and westernmost part of the state. As of the 2010 census, the region's combined population is 474,251. Evansville, Indiana's third-largest city, is the primary hub for the region, as well as the primary regional hub for a tri-state area which includes Kentucky and Illinois. Other regional hubs include Jasper, Vincennes, and Washington. Although part of a Midwestern state, this region's culture and language is aligned more with that of the Upland South rather than the Midwest.

Southwestern Indiana's topography is considerably more varied and complex than most of Indiana, from large tracts of forest, marshes, rolling fields, large flat valleys in the west and south, to several chains of low mountains, high hills, and sharp valleys towards the north and east. Every county in Southwestern Indiana is bounded by a river at one point, whether it be the Wabash River along the west, the Ohio River along the south, the White River, dividing the six northern counties between its two forks, or other smaller rivers. More than 50% of the boundaries of Daviess, Knox, Perry, Posey, and Spencer Counties are dictated by a river or a creek. About 80% Knox County's boundaries are dictated by either the Wabash or the White River. Additionally, over half of the area is located within the Wabash Valley Seismic Zone.

In addition, the southern third of Southwestern Indiana exists within the Ohio River Valley American Viticultural Area, the second-largest wine appellation in the United States. The Ohio River Valley AVA occupies all of Perry, Posey, Spencer, Vanderburgh, and Warrick Counties, nearly 90% of Gibson County, and portions of Pike and Dubois Counties in Southwestern Indiana. 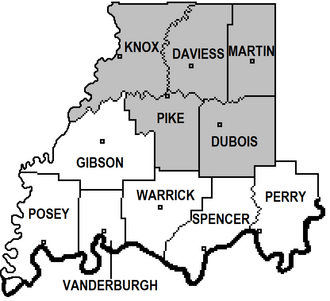 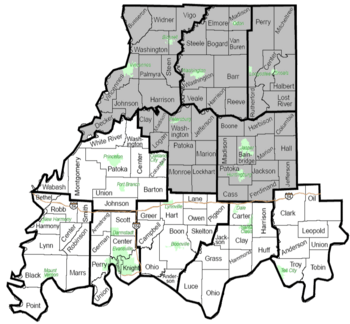 The Townships of Southwestern Indiana

The oldest interstate in the region, this stretch of I-64, has been the primary artery of east-west traffic since entering service around 1983. While relatively flat in Posey, Vanderburgh, and Gibson Counties, its terrain becomes hillier as it passes through the nearly 30-mile stretch in Warrick County. By the time it approaches U.S. 231, the hills and valleys are sharper, transitioning into the low mountainous conditions found in Perry County as the highway leaves into Crawford County.

The newest interstate in the region, this stretch of I-69 is provides interstate access to Bloomington and, eventually, to Indianapolis. Like I-64, the terrain around Evansville is relatively flat, but becomes hillier in northeastern Gibson County, and becomes progressively hillier through Pike County. The stretch of I-69 in Daviess County between Washington and Elnora is actually flatter than the stretch in Vanderburgh County, while containing some hilly sections south of Washington, but becomes very hilly northeast of Elnora as the highway approaches Crane and leaves the area into Greene County.

U.S. Route 41
US 41 extends from Miami, Florida to the Upper Peninsula of Michigan. This four-lane highway serves the western half of the region. US 41 goes through the city of Evansville, becoming six lanes between the Lloyd Expressway and Diamond Avenue. It bypasses Princeton and Vincennes before continuing north towards Terre Haute.

U.S. Route 50
US 50 extends from Baltimore, Maryland, to Sacramento, California. It is a winding two-lane road in the eastern half of the region which becomes a four-lane road in the western half, near Washington, before joining US 41 in the bypass around Vincennes. It intersects with I-69 just east of Washington. It leaves Indiana on the Red Skelton Bridge.

U.S. Route 150
Coterminous with US 50 from Vincennnes to Shoals, it breaks off and heads eastward while US 50 continues northeast.

U.S. Route 231
This now mostly new four-lane road serves the eastern half of the region. The route is in a process of relocation, as a new four-lane road is under construction from Rockport to Greene County, where it will intersect with Interstate 69.

From 1966 to 2006, the five southwesternmost counties—Gibson, Posey, Spencer, Vanderburgh, and Warrick—observed Central Daylight Time. The six northern and eastern counties—Daviess, Dubois, Knox, Martin, Perry, and Pike, since 1982—observed a year-round Eastern Standard Time as did much of the rest of the state.

Not even a month after the change, people began to complain about some of the same problems that people that lived in the original Central Daylight Time counties had been complaining about for years. Most prevalent was the complaint that the Crane Naval Surface Warfare Center had become a "time island". The workers' union of the base subsequently petitioned the Martin County Commissioners to repetition for a change back to Eastern Time. The resulting chain reaction resulted in all of the former Eastern Time counties, along with two Central Time counties, Gibson and Spencer, petitioning for a change to Eastern Time.

On September 20, 2007, after only 15 months and only one winter on Central Time, the DOT returned only five of the eight applicants to Eastern Time. Gibson, Perry and Spencer Counties did not have enough support to return or to go to Eastern Time. However, three of the five counties, Daviess, Knox, and Pike, had little support either, but "convenience of commerce" was given as the reason for their time changes, despite commute patterns into Evansville and the Toyota Motor Manufacturing Indiana plant in Gibson County, the region's largest employer. In Dubois County, a heated disagreement between Huntingburg and Jasper occurred over the topic. Most of Huntingburg's industry and economy is geared towards the Central Time Zone, where Owensboro, Kentucky, and Spencer County, and the Huntingburg area's largest employers, AK Steel and Holiday World are located. Jasper, though, insists that the majority of its business is aimed at the Eastern Seaboard and returning to Eastern Time would be in the best interest of the county.

So whether it was supported or not, Daviess, Dubois, Knox, Martin, and Pike returned to Eastern Daylight Time on November 4, 2007, once again dividing Southwestern Indiana. The DOT has stated that it will not hold any more hearings on the subject until the fall of 2008.

All content from Kiddle encyclopedia articles (including the article images and facts) can be freely used under Attribution-ShareAlike license, unless stated otherwise. Cite this article:
Southwestern Indiana Facts for Kids. Kiddle Encyclopedia.