Kids Encyclopedia Facts
Not to be confused with Jasper County, Indiana.

Jasper is a city in, and the county seat of, Dubois County, Indiana, United States, located along the Patoka River. The population was 16,703 at the 2020 census making it the 48th largest city in Indiana. On November 4, 2007, Dubois County returned to the Eastern Time Zone, after having moved to the Central Time Zone the previous year. Land use in the area is primarily agricultural. The Indiana Baseball Hall of Fame, which honors players and others associated with the national pastime who were born or lived in Indiana, is located in Jasper.

Jasper was founded in 1818. The Enlow family were the first settlers of the town. Jasper was originally going to be called Eleanor, the wife of settler Joseph Enlow, but she opted to suggest a name herself, and named the city after a passage in the Bible (Revelations 21:19).

Jasper was not officially platted until 1830. That year, the community became the new county seat of Dubois County, succeeding Portersville.

The Jasper post office has been in operation since 1832. During the New Deal era, Jessie Hull Mayer won a federal commission to paint a mural as part of the Section of Painting and Sculpture′s projects, later called the Section of Fine Arts, of the Treasury Department. Indiana Farming Scene in Late Autumn depicts a harvest scene on a farmstead, with no indication of the town. In 1975, the painting was featured as part of a film, Art for Main Street: The Indiana Post Office Murals, produced by the Indiana Historical Society. 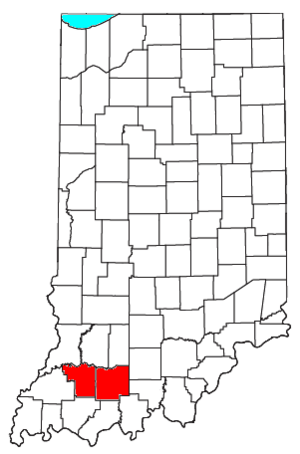 Location of the Jasper Micropolitan Statistical Area in Indiana

Jasper is the principal city of the Jasper Micropolitan Statistical Area, a micropolitan area that covers Dubois and Pike counties and had a combined population of 54,734 at the 2010 census.

Of the total Jasper population:

The Jasper Strassenfest is a four-day event held annually during the first weekend in August. The "Fest" is a celebration between Jasper and its German sister-city Pfaffenweiler, a small village in southwest Germany. Many citizens of Pfaffenweiler travel to Jasper around this time of year. The street festival encompasses the entire city square, complete with numerous food stands, rides, and a very large Biergarten. On average, over 1,300 pounds of bratwurst are consumed during the four-day event. The Strassenfest culminates in a Sunday parade and evening fireworks. The festival also incorporates a golf tournament, beauty pageant (Miss Strassenfest), box parade, fishing tournament, and a network of German "Polka Masses" at the three Roman Catholic parishes: St. Joseph's, Holy Family, and Precious Blood. 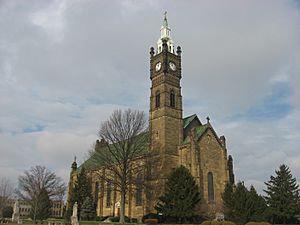 There are 12 Dubois County locations or buildings listed on the NRHS with 5 being in Jasper.

Jasper is a regional center in Southwestern Indiana, noted for its heavily German Catholic ancestral roots. Jasper has often been called the "Wood Capital of the World", boasting many furniture companies, including Kimball International and Masterbrand Cabinets. Jasper is home to the Southern Indiana Education Center (SIEC), Jasper Engines & Transmissions (largest re-manufacturer in the market), and to a satellite campus of Vincennes University.

The largest industry sectors by employment in Jasper are manufacturing, retail, and health care & social services.

According to the Jasper Chamber of Commerce 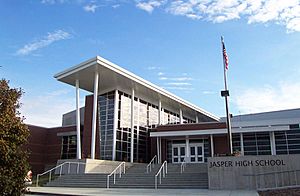 In 1970, the school system of Ireland, an unincorporated town west of Jasper along State Route 56, was consolidated into that of Jasper.

The city has a free lending library, the Jasper-Dubois County Public Library. In January 2021, the library moved into a new building that it shares with the Thyen-Clark Cultural Center.

All content from Kiddle encyclopedia articles (including the article images and facts) can be freely used under Attribution-ShareAlike license, unless stated otherwise. Cite this article:
Jasper, Indiana Facts for Kids. Kiddle Encyclopedia.