Ireland is an unincorporated community in Madison Township, Dubois County, in the U.S. state of Indiana.

The town was founded on land purchased from the United States government by John Stewart, a native of Ireland, on December 23, 1816. The town was once intended to be called American City, but changed to Ireland when the name was not approved by the post office department. The town was laid out by John Stewart's son James, and four others. The first town map is dated May 20, 1865, but had been a small village many years before that.

The Ireland post office has been in operation since 1853. Ireland's school system was absorbed by the Jasper school system in 1970. 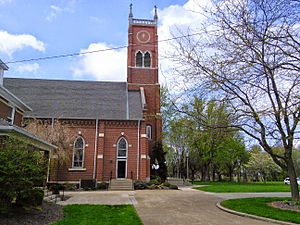 All content from Kiddle encyclopedia articles (including the article images and facts) can be freely used under Attribution-ShareAlike license, unless stated otherwise. Cite this article:
Ireland, Indiana Facts for Kids. Kiddle Encyclopedia.