The climate in this area is characterized by hot, humid summers and generally mild to cool winters. According to the Köppen Climate Classification system, Mount Vernon has a humid subtropical climate, abbreviated "Cfa" on climate maps. 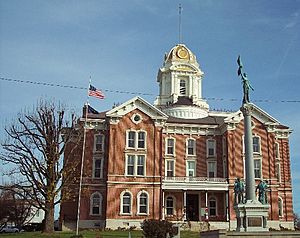 Mount Vernon is the county seat and largest city in Posey County, named for General Thomas Posey, Governor of the Indiana Territory, who had the distinction of growing up next door to George Washington at the original Mount Vernon, and who was widely rumoured to be Washington's illegitimate son. The rumors were dismissed by Posey's biographer, John Thornton Posey.

Mount Vernon was originally called McFaddin's Bluff, and under the latter name was platted in 1816. The present name is after George Washington's Mount Vernon. A post office called Mount Vernon has been in operation since 1818.

There were 2,736 households, of which 32.0% had children under the age of 18 living with them, 48.4% were married couples living together, 13.6% had a female householder with no husband present, 4.5% had a male householder with no wife present, and 33.5% were non-families. 29.8% of all households were made up of individuals, and 13% had someone living alone who was 65 years of age or older. The average household size was 2.40 and the average family size was 2.96.

All content from Kiddle encyclopedia articles (including the article images and facts) can be freely used under Attribution-ShareAlike license, unless stated otherwise. Cite this article:
Mount Vernon, Indiana Facts for Kids. Kiddle Encyclopedia.