Tell City is a city in Troy Township, Perry County, in the U.S. state of Indiana, along the Ohio River. The population was 7,272 at the 2010 census. The city is the county seat of Perry County.

Tell City traces its 150+ year old roots to a meeting in Cincinnati, Ohio, in November 1856. A group of Swiss-German immigrants met there to organize a society known as the "Swiss Colonization Society." Its purpose was to obtain affordable homesteads for mechanics, shopkeepers, factory workers and small farmers in a location where all could live in harmony.

The Society decided to purchase a tract of land three miles (5 km) square to be surveyed into a city plot. The group sent out to purchase the land was told to keep in mind a healthful climate, fertile soil, good water, ample timber, and a location near a navigable river and a railroad, if possible. Purchase of such a site was made in July 1857. The tract, containing 4,152 acres (16.80 km2), was laid out in 392 town blocks with 7,328 building lots and 294 garden lots. 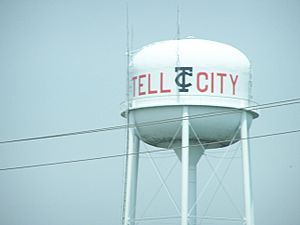 Before the settlers arrived, a name for the new town was selected. Initially called Helvetia, it was soon renamed Tell City, a name easier to pronounce and remember for English-speaking people. It was named for the legendary Swiss hero and liberator, William Tell.

With 100 years of recorded history, the citizens of Tell City held a centennial celebration August 10–17, 1958 in honor of the early settlers and the founding of Tell City. After the success of the Centennial, the Tell City Historical Society decided to sponsor a festival in 1959 to determine if the community would support it as an annual event. The festival, named Schweizer Fest (Swiss Fest), was a great success. Today, the festival remains one of Indiana's longest-running community festivals.

On March 17, 1960, Northwest Orient Airlines Flight 710, a Lockheed Electra turboprop airliner flying from Chicago to Miami lost a wing due to aerodynamic flutter and crashed in southern Indiana near Tell City. All 63 on board, including the crew, perished. The victims were impacted in a 30-foot-deep (9.1 m) crater, which became their final resting place. A monument with the names of the victims and the date of the tragedy marks the grave.

The steamboat 'TELL CITY' was built in 1889 and named after Tell City. It was used to carry passengers and freight on the Ohio River until it sank in April 6, 1917 in Little Hocking, Ohio. The pilothouse survived the sinking and is the oldest remaining steamboat pilothouse, located at the Ohio River Museum in Marietta, Ohio.

Tell City is home to the Tell City High School Marksmen. The school is in Class 2A for football, basketball, and baseball.

Tell City has a public library, a branch of the Perry County Public Library.

There have been several notable residents and former residents of Tell City, Indiana.

All content from Kiddle encyclopedia articles (including the article images and facts) can be freely used under Attribution-ShareAlike license, unless stated otherwise. Cite this article:
Tell City, Indiana Facts for Kids. Kiddle Encyclopedia.