Burnaby Public Library or BPL is a public library that serves Burnaby, British Columbia and the surrounding Lower Mainland. According to its 2019-2022 strategic plan, BPL aims to "empower the community to engage with and share stories, ideas and information." BPL provides access to information services and library collections (including books, DVDs, newspapers, magazines and research materials) through its four branches as well as online and through community outreach.

BPL provides a broad range of services and programs that reflect the needs of its community. The following list is a small sample of the regular services available:

Burnaby's first library was founded in 1927 as the North Burnaby Library Association with members paying one dollar to use a collection of 397 books. The first actual library building was established on East Hastings Street in 1935.

The Kingsway branch was established in 1962 followed by the Central Park branch in 1974 and the Cameron branch in 1980.

In 2009, the Kingsway branch was closed and replaced with the Tommy Douglas branch. The branch is named after Canadian politician Tommy Douglas, who served as the Member of the House of Commons of Canada for the now-defunct Burnaby—Coquitlam district from 1962 to 1968. 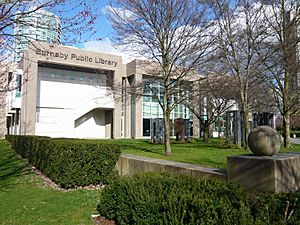 The library has four branches:

All content from Kiddle encyclopedia articles (including the article images and facts) can be freely used under Attribution-ShareAlike license, unless stated otherwise. Cite this article:
Burnaby Public Library Facts for Kids. Kiddle Encyclopedia.