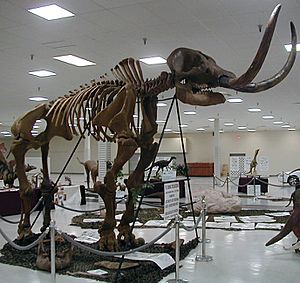 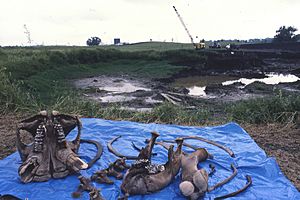 The Burning Tree Mastodon site in Heath, southern Licking County, Ohio, represents the location where the most complete skeleton of American mastodon was found. It is dated to about 11,500 BP. It is believed that there was human presence at the site at that time.

The specimen was discovered on 12 December 1989 by a Flower Excavating Company drag line operator who was digging a new pond on the Burning Tree Golf Course grounds. The drag line’s shovel caught and damaged the skull. In the following three days, the fossil was excavated during relatively bitter winter cold and blowing winds. Excavation was conducted by the Ohio Historical Society and the Licking County Archaeology & Landmarks Society and volunteers from several organizations.

The locality was the grounds of the Burning Tree Golf Course, southern side of Ridgley Tract Road, just west of Lake Drive, south side of Heath, southern Licking County, central Ohio, USA.

The American mastodon is an extinct species of proboscidean mammal, Mammut americanum (Kerr, 1792) (Animalia, Chordata, Vertebrata, Mammalia, Proboscidea, Mammutidae). The only living proboscideans are the African elephants (Loxodonta africana and Loxodonta cyclotis) and the Asian elephant (Elephas maximus). Mammut americanum had a widespread distribution during the Pleistocene. Its fossil remains are found from Alaska to Florida, but are most commonly encountered in eastern America. Average statistics reported for the American mastodon are: ~15 feet long, 9-10 feet tall at the shoulder, ~8,000-10,000 pounds. During life, mastodons were covered with coarse, brownish hair, unlike modern elephants. Thick body hair on Pleistocene proboscideans was an evolutionary adaptation to harsh wintery climates.

Remains of >150 mastodons have been reported in Ohio, but only about a dozen or so are semi-complete. The Burning Tree Mastodon is a ~30 year old male and is 90-95% complete, missing only the right rear leg, a few tail bones, two ribs, and all the toe bones. The lower spine and right rib cage have healed injuries which have been interpreted as the result of battles with other mastodons. 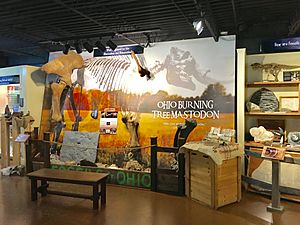 Cut marks on some of the ribs indicate that this individual was butchered by early humans. Nevertheless, stone tools were not discovered in the area.

Isotopic dating of wood closely associated with the skeleton gives dates of 11,450 to 11,660 years. Isotopic dating of actual bone material gives an 11,390 year date (during the Wisconsinan Glacial Interval of the near-latest Pleistocene).

In addition to being near-complete, the Burning Tree Mastodon is remarkable in other ways. Preserved gut contents indicated a diet of moss, seeds, leaves, water lilies, and swamp grass. Before this discovery, American mastodons were interpreted as having diets consisting principally of twigs & cones from evergreen trees.

These ancient bacteria were, for a while, considered the oldest known living organisms anywhere on Earth. However, still-living gut bacteria have been isolated from insects in early Cenozoic amber and viable halobacteria have been recovered from Paleozoic and even late Precambrian rock salt.

The original Burning Tree Mastodon skeleton was sold in 1993 for over US$600,000 and now resides in a museum in Japan.

All content from Kiddle encyclopedia articles (including the article images and facts) can be freely used under Attribution-ShareAlike license, unless stated otherwise. Cite this article:
Burning Tree Mastodon Facts for Kids. Kiddle Encyclopedia.