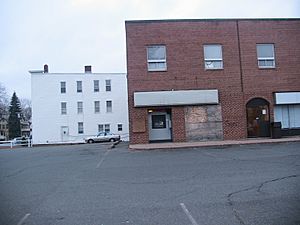 Burnside Avenue is a main thoroughfare connecting East Hartford, Connecticut's Main Street to Manchester, Connecticut. The road is part of U.S. Route 44. It runs through a low income portion of East Hartford and is home to a significant population of Hispanics and African Americans. East Hartford Middle school is located near the center of the avenue and is next to the main campus of Goodwin College. The eastern portion of Burnside Avenue has little housing, but is significantly developed with strip malls and restaurants. The Avenue is home to two important parks in East Hartford. Martin Park in the west has a swimming pool and a skating park along with access to many of East Hartford's bike trails. The east of the avenue has an entrance to Wickham Park, a large private park containing an aviary, bike trails, hiking trails, picnic grounds, and a view of Hartford's skyline.

Before the turn of the 20th century, Burnside was colloquially considered a separate village from the rest of East Hartford. Its rough terrain and proximity to the Hockanum river led to early artifice, so that even before the industrial revolution, it was dominated by paper mills. By 1900, Burnside was developing as a streetcar suburb. Its development prior to Pratt and Whitney (1929) explains its high density relative to the post-war housing so prevalent in the remainder of the town.

In 2016, Burnside Avenue underwent a road diet which reduced the number of travel lanes from four to two, along with a central turn lane and added bike lanes. The road had sustained a significant umber of accidents, some fatal, and a number of which involved bicycles.

All content from Kiddle encyclopedia articles (including the article images and facts) can be freely used under Attribution-ShareAlike license, unless stated otherwise. Cite this article:
Burnside Avenue Facts for Kids. Kiddle Encyclopedia.