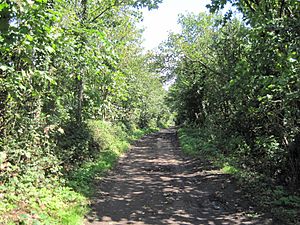 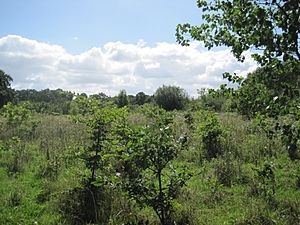 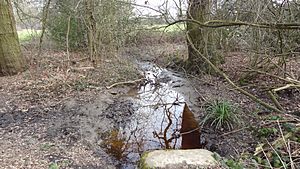 Burtonhole Lane is an old green lane which is now a public footpath and bridleway. It is flanked by tall hedgerows and woodland strips, which support a good variety of shrubs and a number of stately trees, most of them oak and ash. Birds include chaffinch, goldcrest, and green woodpecker, while mammals include stoat, weasel and bank vole. Frogs breed in a wet ditch at the base of the hedgerows.

The fields are old London clay grassland, dominated by Yorkshire fog with some tufted hair-grass. Damper areas and Burtonhole Brook support a much more diverse flora.

All content from Kiddle encyclopedia articles (including the article images and facts) can be freely used under Attribution-ShareAlike license, unless stated otherwise. Cite this article:
Burtonhole Lane and Pasture Facts for Kids. Kiddle Encyclopedia.