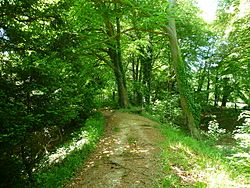 Part of the footpath that circles Bury Hill fort

Bury Hill is the site of a former Iron Age hillfort about 1.5 miles (2.4 km) southwest of the centre of Andover, Hampshire. The site encloses about 22 acres (8.9 ha). There are evident two stages to the construction of the fort, the first is a low single rampart and ditch, to the north and west of the second, stronger double rampart and ditch earthworks, part of which overlies the earlier work. The banks and the ditch are apparently in good condition, although fairly heavily wooded. A footpath encircles the hill fort on the inner rampart, accessible from the northeast and southwest. The centre is left to grass and very secluded, but is not accessible to the general public. The site was used well into the Roman era and was used as a camp by King Canute in 1016, when he fought Edmund Ironside in the Battle of Andover.

The site is south of the Pillhill Brook and Anna Valley, west of the village of Upper Clatford and east of the River Anton. To the south is open farmland. The hill summit is 100 metres (330 ft) above Ordnance Datum.

All content from Kiddle encyclopedia articles (including the article images and facts) can be freely used under Attribution-ShareAlike license, unless stated otherwise. Cite this article:
Bury Hill Facts for Kids. Kiddle Encyclopedia.