Kids Encyclopedia Facts
This page is about the community in Texas. For other uses, see Bushland (disambiguation). 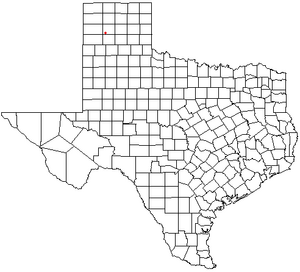 Location of Bushland in the state of Texas. 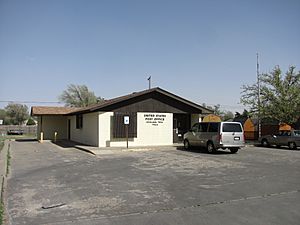 Bushland is an unincorporated community and census-designated place (CDP) in southwestern Potter County, Texas, United States. A small portion of the CDP extends south into Randall County. According to the Handbook of Texas, the community had an estimated population of 130 in 2000. The community is part of the Amarillo, Texas Metropolitan Statistical Area.

Established as a station on the Chicago, Rock Island and Gulf Railway, Bushland was named for William Henry Bush, a Chicago native. In 1898, land owner Joseph Glidden transferred the Frying Pan Ranch to Mr. Bush, who was his son-in-law. The total cost was $68,000. Thereafter, Bush donated land for a town site and a railroad right-of-way. On July 3, 1908, the town was formally dedicated by Bush and his associate S.H. Smiser.

Farmers soon settled in and around Bushland. A public school district was established, followed by the opening of a post office in January 1909. The community's population remained small, hovering near 20 during the 1910s and 1920s. By 1940, that figure had risen to 175 with four businesses operating in the community. Throughout the latter half of the twentieth century and into the twenty-first, Bushland's population has remained steady at around 130.

According to the Köppen Climate Classification system, Bushland has a semi-arid climate, abbreviated "BSk" on climate maps.

All content from Kiddle encyclopedia articles (including the article images and facts) can be freely used under Attribution-ShareAlike license, unless stated otherwise. Cite this article:
Bushland, Texas Facts for Kids. Kiddle Encyclopedia.