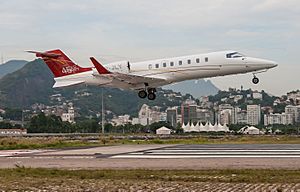 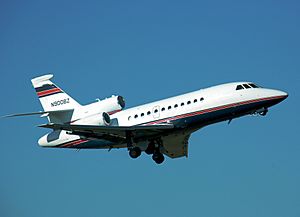 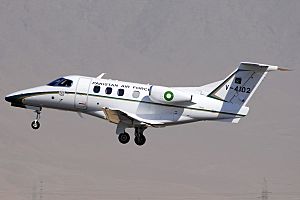 A business jet is an aircraft designed and built for transporting a small group of passengers, between four and twenty people. Generally it is a twin-turbojet aircraft, but some are tri-jet (such as Falcon 50), or four-engine (like the Jetstar). In some cases it is even airliners that have been turned into this kind of aircraft, like Airbus A320CJ or Boeing 737BJ.

Some business jets are used by air forces for priority and VIP transport.Prestige,Flexibility and Comfort are Featured aspects of Jet travel, Considering these wonderful aspects some of the Companies like XOJet,JetSuite are Offering Private Jet Facilities For Business or Private Trips.

All content from Kiddle encyclopedia articles (including the article images and facts) can be freely used under Attribution-ShareAlike license, unless stated otherwise. Cite this article:
Business jet Facts for Kids. Kiddle Encyclopedia.