The Dassault Falcon 20 is a French twin-turbojet aircraft. It was the first business jet built in France. It can carry two pilots and between eight and twelve passengers. 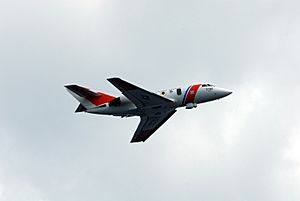 The United States Coast Guard uses a special variant for search and rescue and reconnaissance called HU-25 Guardian. A similar aircraft is used by French Navy as Gardian for operations in Overseas France.

All content from Kiddle encyclopedia articles (including the article images and facts) can be freely used under Attribution-ShareAlike license, unless stated otherwise. Cite this article:
Dassault Falcon 20 Facts for Kids. Kiddle Encyclopedia.