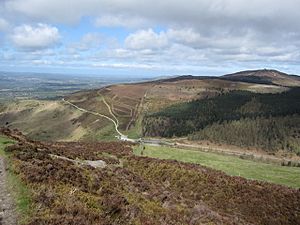 A view, from Foel Fenlli, showing the summit of Bwlch Penbarras and the Offa's Dyke Path heading north towards Moel Famau.

Bwlch Penbarras (also known as Bwlch Pen Barras, or the Old Bwlch) is a mountain pass in the Clwydian Range Area of Outstanding Natural Beauty, in north-east Wales. The gap, which is at an altitude of 360 m (1,180 ft) lies between the hills of Moel Famau and Foel Fenlli. An unclassified road between Tafarn-y-Gelyn and Llanbedr-Dyffryn-Clwyd runs through the pass. Offa's Dyke Path also crosses the summit of Bwlch Penbarras.

The alternative name of 'Old Bwlch' refers to it once being a historic route between Mold and Ruthin via Llanbedr Dyffryn Clwyd. It was superseded by the 18th-century Mold to Denbigh turnpike (which is now the A494 road) that crosses the Clwydian Range several miles south of Bwlch Penbarras, at Bwlch-y-Parc. The eastern side of the pass is almost a straight ascent with no severe gradients, however, the western side of the summit is categorised with steep drops, a narrower road and sheer gradients: the height of the pass changes 260 m (850 ft) in 1.5 mi (2.4 km) with a gradients approaching 25% and a sharp hairpin bend.

The pass is a popular access point for walkers venturing to Moel Famau, and as such there are two Natural Resources Wales car parks: one at the summit of the pass, and one a mile down the eastern side of the pass towards Tafarn-y-Gelyn. Access tracks climb through the forest from both car parks to Moel Famau's summit.

The steep climb on its western approach from Llanbedr-Dyffryn-Clwy has made the pass very popular with cyclists. Cycling Weekly magazine has featured it as a 'Killer Climb', and also listed it in the Dave Lloyd Mega Challenge cyclosportive.

Nigel Blackwell of Half Man Half Biscuit mentioned the pass in a 2012 interview when he said: "the biggest achievement for me is creating a situation for myself whereby I can get up of a morning and decide to go and tackle Bwlch Pen Barras on the bike".

All content from Kiddle encyclopedia articles (including the article images and facts) can be freely used under Attribution-ShareAlike license, unless stated otherwise. Cite this article:
Bwlch Penbarras Facts for Kids. Kiddle Encyclopedia.