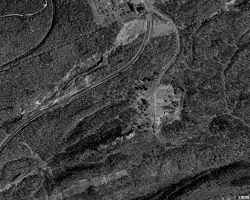 The clearing that was once Byrnesville

Byrnesville was a town located in Conyngham Township, Columbia County, Pennsylvania, United States. It was located about halfway between Centralia and Ashland. In 1985, the population of Byrnesville was approximately 75.

Byrnesville was one of the casualties of the Centralia mine fire. The last home in Byrnesville was torn down in 1996, which spelled the end for this town. The only remaining structures there now are a religious shrine on a hillside, a storage trailer, and an unused garage.

The present-day routing of Pennsylvania Route 61 follows what was an old logging road through Byrnesville, bypassing sections of the original route of the four-lane highway which has been heavily damaged with subsidence due to the underground Centralia mine fire.

All content from Kiddle encyclopedia articles (including the article images and facts) can be freely used under Attribution-ShareAlike license, unless stated otherwise. Cite this article:
Byrnesville, Pennsylvania Facts for Kids. Kiddle Encyclopedia.