Clarence Michael James Stanislaus Dennis, better known as C. J. Dennis, (7 September 1876 – 22 June 1938) was an Australian poet known for his humorous poems, especially "The Songs of a Sentimental Bloke", published in the early 20th century. Though Dennis's work is less well known today, his 1915 publication of The Sentimental Bloke sold 65,000 copies in its first year, and by 1917 he was the most prosperous poet in Australian history.

Together with Banjo Paterson and Henry Lawson, both of whom he had collaborated with, he is often considered among Australia's three most famous poets.

While attributed to Lawson by 1911, Dennis later claimed he himself was the 'laureate of the larrikin'. When he died at the age of 61, the Prime Minister of Australia Joseph Lyons suggested he was destined to be remembered as the 'Australian Robert Burns'. 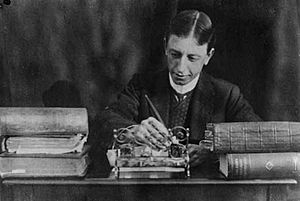 C. J. Dennis was born in Auburn, South Australia. His father owned hotels in Auburn, and then later in Gladstone and Laura. His mother suffered ill health, so Clarrie (as he was known) was raised initially by his great-aunts, then went away to school, Christian Brothers College, Adelaide as a teenager.

At the age of 19 he was employed as a solicitor's clerk. It was while he was working in this job that, like banker's clerk Banjo Paterson before him, his first poem was published under the pseudonym "The Best of the Six". He later went on to publish in The Worker, under his own name, and as "Den", and in The Bulletin. His collected poetry was published by Angus & Robertson.

He joined the literary staff of The Critic in 1897, and after a spell doing odd jobs around Broken Hill, returned to The Critic, serving for a time c. 1904 as editor, to be succeeded by Conrad Eitel. In 1906 he founded The Gadfly as a literary magazine; it ceased publication in 1909. From 1922 he served as staff poet on the Melbourne Herald.

C.J. Dennis married Margaret Herron in 1917. She published two novels and a biography of Dennis called Down the Years.

C. J. Dennis is buried in Box Hill Cemetery, Melbourne. The Box Hill Historical Society has attached a commemorative plaque to the gravestone. Dennis is also commemorated with a plaque on Circular Quay in Sydney which forms part of the NSW Ministry for the Arts – Writers Walk series, and by a bust outside the town hall of the town of Laura. 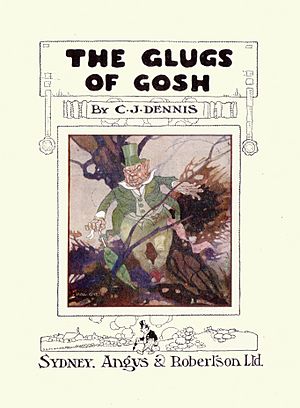 From The Glugs of Gosh

Many shorter works were also published in a wide variety of Australian newspapers and magazines.

All content from Kiddle encyclopedia articles (including the article images and facts) can be freely used under Attribution-ShareAlike license, unless stated otherwise. Cite this article:
C. J. Dennis Facts for Kids. Kiddle Encyclopedia.