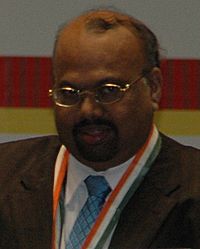 Cheril Krishna Menon alias C. K. Menon, (18 September 1949 – 1 October 2019) was an Indian businessman and philanthropist. He was the chairman and chief executive officer of Behzad Corporation, headquartered in Doha, Qatar. He was awarded the 2006 Pravasi Bharatiya Samman. Menon was honored again by the Government of India, in 2009, with the fourth highest Indian civilian award of Padma Shri. He was born in Thrissur, Kerala.

All content from Kiddle encyclopedia articles (including the article images and facts) can be freely used under Attribution-ShareAlike license, unless stated otherwise. Cite this article:
C. K. Menon Facts for Kids. Kiddle Encyclopedia.