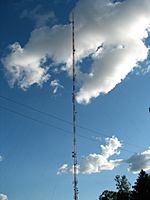 The CHCH Television Tower is a 357.5 metre 1,173 feet-high guyed TV mast located at 481 First Road West in Stoney Creek, Ontario, Canada. The tower houses the primary transmitter for the independent television station CHCH-DT as well as that of CITS-DT, the flagship of the religious Yes TV television system. It is currently the fourth-tallest structure in Canada.

The mast is located on the edge of the Niagara Escarpment, so when viewed from the bottom of the escarpment with an elevation some 100+ meters or 300+ feet lower, it appears to be exceptionally tall.

All content from Kiddle encyclopedia articles (including the article images and facts) can be freely used under Attribution-ShareAlike license, unless stated otherwise. Cite this article:
CHCH Television Tower Facts for Kids. Kiddle Encyclopedia.