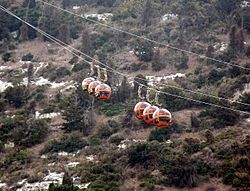 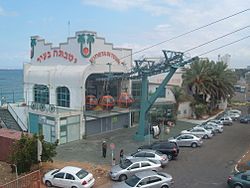 Cable cars in Haifa go from Mount Carmel to the Mediterranean beaches. In 2007 the City Hall of Haifa decided to extend the line to the University of Haifa and open a new line from Mount Carmel to Haifa Bay. The new projects will involve building a new central bus station and new bus routes across the city. The project is still in construction.

All content from Kiddle encyclopedia articles (including the article images and facts) can be freely used under Attribution-ShareAlike license, unless stated otherwise. Cite this article:
Cable cars in Haifa Facts for Kids. Kiddle Encyclopedia.