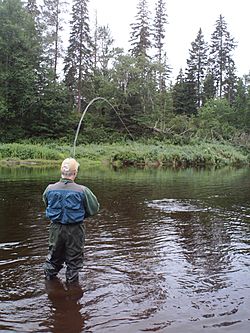 The Cains River is a Canadian river in New Brunswick. It is 113 kilometres long.

Much of the upper Cains River flows through crown land, owned and managed by the provincial government, and therefore cannot be purchased for private use. It is public water and therefore can be used by any fisherman. The Cains River is classified as salmon water from the mouth to the North Cains and requires a guide for non-resident anglers.

The river is noted for Atlantic Salmon fishing, especially in the autumn. It is a noted trout river as well. A popular fly pattern originated for the dark, tannin-stained waters of the Cains is the Copper Killer. Some of the best pools in the lower Cains River are private water and care must be used here. There is some public water on the lower Cains River, but access can be difficult and use of a licensed fishing guide is encouraged to avoid trespassing.

Salmon fishing is usually best there after a heavy fall rain raises the water level and causes pods of large salmon to begin to move up the Cains River in search of their spawning beds.

All content from Kiddle encyclopedia articles (including the article images and facts) can be freely used under Attribution-ShareAlike license, unless stated otherwise. Cite this article:
Cains River Facts for Kids. Kiddle Encyclopedia.