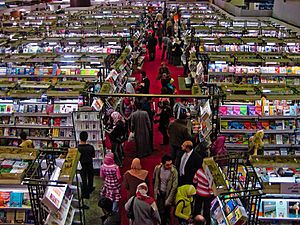 Crowds walk among the thousands of titles available at the 41st Cairo International Book Fair, 3 February 2009.

The Cairo International Book Fair is one of the biggest book fairs in the world with hundreds of book sellers and about two million visitors every year. It is the largest book fair in the Arab world, as well as the oldest. In 2006 it was the second largest book fair in the world after the Frankfurt Book Fair. It is held every year in the last week of January in Cairo, Egypt, at the Cairo International Fair Grounds in Madinat Nasr, near Al-Azhar University. It is organised by the General Egyptian Book Organisation.

Cairo publishers make 60% of Arabic language books printed in the world. The state owned General Egyptian Book Organisation, is the largest book publisher in the Arab world. The fair has displays and speakers from publishers and government agencies from around the world, as well as sellers of books, video, and other media. Lectures, readings, and other public events take place during the three weeks the of the book fair, with items in Arabic, English, and other languages. The fair brings in ordinary Egyptians, with media on a range of topics, outdoor events, and even fireworks to entertain the large crowds.

The CIBF was started by the General Egyptian Book Organisation, a government publishers and retailers group, in 1969 as part of the celebrations of the 1000th anniversary of the start of the city of Cairo. The 41st fair was held from 21 January to 5 February 2009.

All content from Kiddle encyclopedia articles (including the article images and facts) can be freely used under Attribution-ShareAlike license, unless stated otherwise. Cite this article:
Cairo International Book Fair Facts for Kids. Kiddle Encyclopedia.