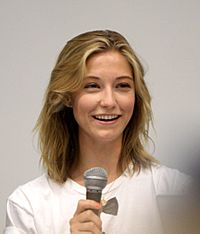 Caitlin Beverly Gerard (born July 26, 1988) is an American actress. She had a leading role in the first season of the drama series American Crime (2015). She starred as Ashleigh in the 2010 drama The Social Network and as Ashley in 2012 horror movie Smiley.

All content from Kiddle encyclopedia articles (including the article images and facts) can be freely used under Attribution-ShareAlike license, unless stated otherwise. Cite this article:
Caitlin Gerard Facts for Kids. Kiddle Encyclopedia.