Caladenia barbarossa, commonly known as the common dragon orchid is a species of orchid endemic to the south-west of Western Australia. It can be distinguished by its distinctive labellum which is attractive to species of male thynnid wasps. 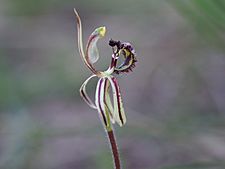 Caladenia barbarossa was first described by Reichenbach in 1871 in Beitrage zur Systematischen Pflanzenkunde, from a specimen collected by James Drummond in 1843, near the Swan River. In a review of the genus Caladenia in 2004, David Jones and Mark Clements proposed a name change to Drakonorchis barbarossa but the change has not been widely adopted. The specific epithet was originally Barbarossa, indicating that the plant was named after Barbarossa, named thus for his red beard also.

The common dragon orchid is widespread and common, between Bindoon, Ravensthorpe and Esperance in the Avon Wheatbelt, Esperance Plains, Jarrah Forest and Mallee biogeographic regions. It grows in sandy or clayey loams in moist situations in a wide range of habitats but especially in Casuarina thickets.

Common dragon orchid is pollinated by male thynnid wasps when they try to copulate with the flower. A male Thynnoides bidens has been photographed on the labellum of a flower of this species.

Caladenia barbarossa is classified as "Not Threatened" by the Western Australian Government Department of Parks and Wildlife.

All content from Kiddle encyclopedia articles (including the article images and facts) can be freely used under Attribution-ShareAlike license, unless stated otherwise. Cite this article:
Caladenia barbarossa Facts for Kids. Kiddle Encyclopedia.