The Calder Houses in Cedar Rapids, Iowa, United States are historic houses that were built in 1868. The two identical houses were built by Charles Calder who moved to Cedar Rapids from the state of New York in 1851. He was involved in real estate and land speculation and at the time of his death in 1890 he held a significant amount of real estate in the city. The houses are two-story front gable cottages. The brick structures are built on stone foundations. They are among the oldest houses in Cedar Rapids. The houses were listed on the National Register of Historic Places in 1978. 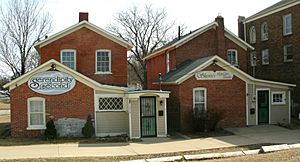 The Calder Houses from the rear

All content from Kiddle encyclopedia articles (including the article images and facts) can be freely used under Attribution-ShareAlike license, unless stated otherwise. Cite this article:
Calder Houses Facts for Kids. Kiddle Encyclopedia.