The Calhoun Mansion is a Victorian house at 16 Meeting St., Charleston, South Carolina. The mansion is open for public tours.

George W. Williams bought the "Lowndes Lot" on Meeting Street and already had plans for a large house with attached conservatory, a hot house, extensive gardens, and an observatory atop the main house by 1873. The house was built in 1875 and 1876 for George W. Williams, a businessman, according to plans drawn by W.P. Russell by the Devereux Brothers as contractors. The cornerstone was laid April 26, 1875. 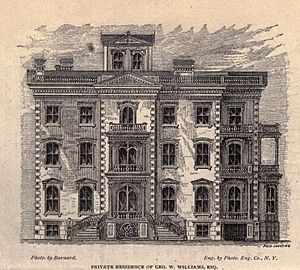 George W. Williams' new house appeared in an illustrated guide to Charleston in 1875.

The 24,000-square-foot house has thirty main rooms and many more smaller rooms. The main hall is 50 feet long and 14 feet wide. The house has a ballroom with a 45-foot-high ceiling.

When Williams died, in 1903, his house was inherited by his son-in-law, Patrick Calhoun, a grandson of John C. Calhoun. It was from his ownership that the house derived its common name, the Calhoun Mansion. It opened as a hotel starting in 1914.

In 1932, the rear portion of the property, which faces on Church Street to the east, was subdivided, and the original stables and servants' quarters were converted into the Louis Gourd House.

Attorney Gedney Howe and his wife, Patricia, bought the house in 1976 and undertook a restoration. In 2000, Mr. Howe put the house up for sale, but it was still unsold by 2004, when he opted to advertise it for auction to occur on May 25, 2004. Before the auction, however, a private sale was arranged to lawyer and preservationist Howard Stahl.

All content from Kiddle encyclopedia articles (including the article images and facts) can be freely used under Attribution-ShareAlike license, unless stated otherwise. Cite this article:
Calhoun Mansion Facts for Kids. Kiddle Encyclopedia.