Fort Hill, also known as the John C. Calhoun Mansion and Library, is a National Historic Landmark on the Clemson University campus in Clemson, South Carolina. The house is significant as the home of John C. Calhoun, the 7th Vice President of the United States, from 1825 to 1850. It is now a museum and library maintained in his memory. 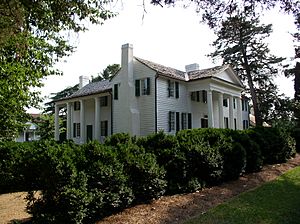 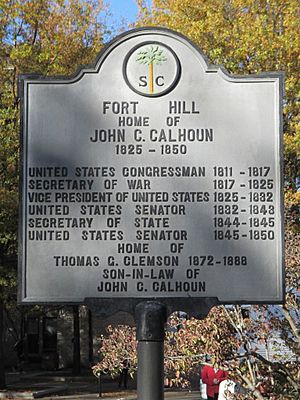 The house was originally built as a four-room house about 1803 and was called Clergy Hall by Dr. James McElhenny, who was the pastor of Hopewell Presbyterian Church. The house later became the home of John C. Calhoun and his wife Floride Calhoun in 1825. Calhoun enlarged it to 14 rooms and renamed it Fort Hill for nearby Fort Rutledge, which was built around 1776. The architectural style is Greek revival with Federal detailing and with simple interior detailing.

After John Calhoun's death in 1850, the property and the 50 people enslaved there passed to his wife to be shared with three of her children: Cornelia, John, and Anna Maria, wife of Thomas Green Clemson. Anna sold her share to Floride Calhoun. Floride Calhoun sold the plantation to her son, Andrew Pickens Calhoun, and held the mortgage. After Andrew died in 1865, she filed for foreclosure against Andrew's heirs before her death in 1866. After lengthy legal proceedings, the plantation was auctioned at Walhalla in 1872. The executor of her estate won the auction, which was divided among her surviving heirs. Her daughter, Anna Clemson, received the residence with about 814 acres (329 ha) and her great-granddaughter, Floride Isabella Lee, received about 288 acres (117 ha). Thomas Green and Anna Clemson moved into Fort Hill in 1872. After Anna's death in 1875, Thomas Green Clemson inherited Fort Hill. In his 1888 will, Clemson bequeathed more than 814 acres (329 ha) of the Fort Hill estate to the State of South Carolina for an agricultural college with a stipulation that the dwelling house "shall never be torn down or altered; but shall be kept in repair with all articles of furniture and vesture...and shall always be open for inspection of visitors." Clemson University has operated Fort Hill as a house museum as stipulated in the will. The house is all that remains of what was once an extensive plantation estate.

The home was designated a National Historic Landmark in 1960.

Fort Hill was closed for a two-year restoration project and was reopened in spring of 2003. Fort Hill was named a national treasure by the Save America's Treasures program, and its artifacts are currently undergoing a comprehensive conservation program funded by this federal grant and matching funds.

All content from Kiddle encyclopedia articles (including the article images and facts) can be freely used under Attribution-ShareAlike license, unless stated otherwise. Cite this article:
Fort Hill (Clemson, South Carolina) Facts for Kids. Kiddle Encyclopedia.