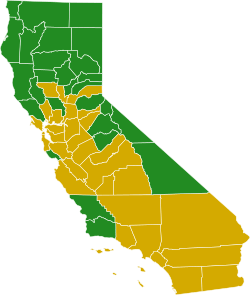 The 2016 California Democratic primary was held on June 7 in the U.S. state of California. The primary was nonpartisan, meaning the candidates were not divided based on their political party. Hillary Clinton won the primary with 53.07% of the popular vote.

In 2015, Hillary Clinton dominated the polls. It slowly become a close call between Clinton and Bernie Sanders. The most recent poll before the primary, which was conducted by Fox News from April 18-21, 2016, says that Clinton has 48% of the vote compared to 46% for Sanders. The sample size was 623 people with a 4% margin of error.

All content from Kiddle encyclopedia articles (including the article images and facts) can be freely used under Attribution-ShareAlike license, unless stated otherwise. Cite this article:
California Democratic primary, 2016 Facts for Kids. Kiddle Encyclopedia.