Results of the Democratic Party presidential primaries, 2016 facts for kids

This article will show the current results of the Democratic Party presidential primaries, 2016. The Democratic Party presidential primary is a process of choosing delegates, or people that represent someone, to go to the 2016 Democratic National Convention. People in each state will vote on who they think will be good for the presidency, and each candidate gets a certain amount of delegates based on the number of votes they receive. The primaries began on 1 February 2016 in Iowa. The remaining candidates are former first lady and secretary of state and senator Hillary Clinton and senator Bernie Sanders.

On June 6, 2016, the Associated Press reported that senator Hillary Clinton has gotten enough delegates to become the presumptive Democratic nominee. However, their count includes some superdelegates. Since superdelegates can vote however they want at the Democratic convention, their votes could change at any time before then, so it is possible (but only remotely possible) that Clinton will not get the nomination. Bernie Sanders endorsed Clinton on 12 July 2016.

Dropped out during primaries

Dropped out before primaries 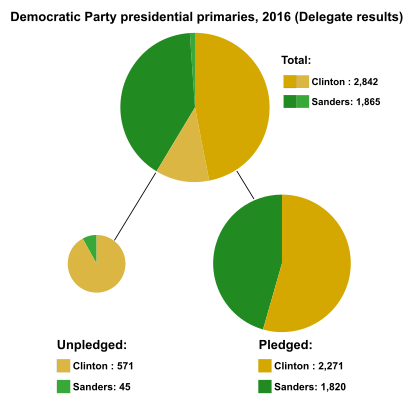 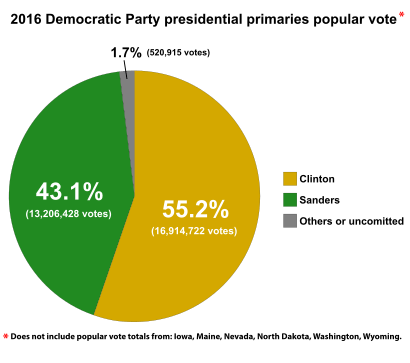 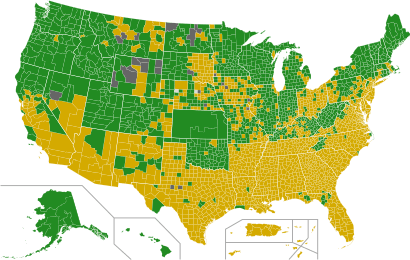 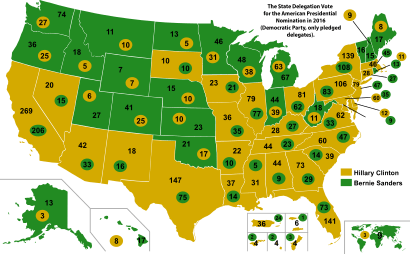 How many delegates the candidates won in each state.      Hillary Clinton      Bernie Sanders

All delegate total are approximate.

* The delegate count that is under the popular vote percentage is estimated. If you add all the delegates listed, you may get a result that is a little bit off from the total at the top of the table. It also only shows pledged delegates, and not super delegates.

All content from Kiddle encyclopedia articles (including the article images and facts) can be freely used under Attribution-ShareAlike license, unless stated otherwise. Cite this article:
Results of the Democratic Party presidential primaries, 2016 Facts for Kids. Kiddle Encyclopedia.