Rosa californica, the California wildrose, or California rose, is a species of rose native to the U.S. states of California and Oregon and the northern part of Baja California, Mexico. The plant is native to chaparral and woodlands and the Sierra Nevada foothills, and can survive drought, though it grows most abundantly in moist soils near water sources. 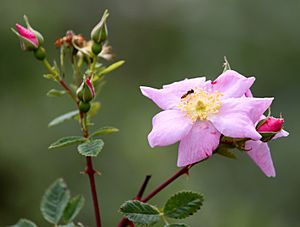 Rosa californica is a bush or thicket-forming shrub with prickly, curving stems. The fragrant flowers may grow singly or in inflorescences of several blooms. Each rose is open-faced and generally flat, with five petals in any shade of pink from almost white to deep magenta. It produces typical rose hips containing yellow seeds. 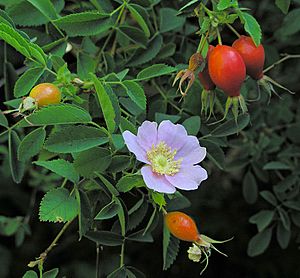 Rosa californica is used in California native gardens and habitat gardens, forming colonies, and attracting wildlife with the bright rose hips in autumn.

The rose hips were used during World War II for their high vitamin content. They are dried for tea, or for use in jellies and sauces. The Cahuilla ate the rose buds raw or soaked them in water for drinking. A tea was also made from the roots, and used for colds. Because the rose hips remain on the plant throughout the winter, they provide food for wildlife during times when little forage is available.

All content from Kiddle encyclopedia articles (including the article images and facts) can be freely used under Attribution-ShareAlike license, unless stated otherwise. Cite this article:
California wildrose Facts for Kids. Kiddle Encyclopedia.