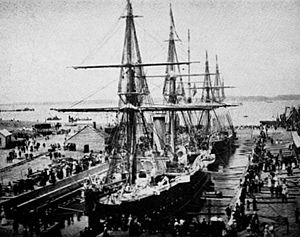 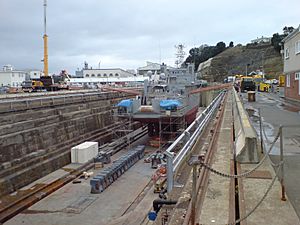 Survey ship HMNZS Resolution of the Royal New Zealand Navy in the dock in 2008.

The Calliope Dock is a historical stone dry dock on the grounds of the Devonport Naval Base, in Devonport, Auckland, New Zealand. It was built in 1888 to service ships of the British Royal Navy, and is still in use today.

At the time of its construction, it was the largest in the Southern Hemisphere, and a strategic asset for the Royal Navy. It was named for Calliope Point, out of which it had been hewn by hand over three years. Coincidentally, one of the two first ships to enter it (as a show of her capacity) was HMS Calliope. Administered at first by the Auckland Harbour Board, the dock was transferred to the navy when the Auckland naval base moved from Torpedo Bay to Devonport, into a swamp area next to the dock.

All content from Kiddle encyclopedia articles (including the article images and facts) can be freely used under Attribution-ShareAlike license, unless stated otherwise. Cite this article:
Calliope Dock Facts for Kids. Kiddle Encyclopedia.