Calomela is a genus of beetles commonly called leaf beetles and in the family Chrysomelidae. They are specialist feeders on various species of Acacia and are not reported as a problem species. The beetles are cylindrical when compared with other leaf beetles and their larvae are globose. 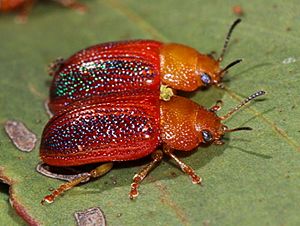 All content from Kiddle encyclopedia articles (including the article images and facts) can be freely used under Attribution-ShareAlike license, unless stated otherwise. Cite this article:
Calomela Facts for Kids. Kiddle Encyclopedia.