Calycoseris is a small genus of two species of annual desert wildflowers in the daisy family, native to western North America in the southwestern United States and Northwestern Mexico. They are characterized by the tack-shaped gland hairs on their upper stems and bracts, the trait which gives them the common name tackstem. The two species of tackstem are the yellow tackstem, Calycoseris parryi and the white tackstem, Calycoseris wrightii. 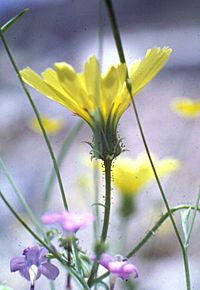 All content from Kiddle encyclopedia articles (including the article images and facts) can be freely used under Attribution-ShareAlike license, unless stated otherwise. Cite this article:
Calycoseris Facts for Kids. Kiddle Encyclopedia.