The University of Cambridge donated 30.5 acres of land on the north slope of Madingley Hill to the American military forces for use as a temporary cemetery during World War II in 1943. Following the war, the American Battle Monuments Commission selected Cambridge as the site for America's permanent World War II cemetery and war memorial in the United Kingdom. America's war dead from three temporary cemeteries in the British Isles were consolidated into the Cambridge cemetery during an extensive cemetery construction project, and simultaneously the US Government repatriated approximately 58% of the existing war dead at the request of the surviving family members. Cambridge American Cemetery and Memorial was dedicated on 16 July 1956.

The cemetery contains 3,809 headstones, with the remains of 3,812 servicemen, including airmen who died over Europe and sailors from North Atlantic convoys. The inscribed Wall of the Missing includes four representative statues of servicemen, sculpted by American artist Wheeler Williams. The wall records the names of 5,127 missing servicemen, most of whom died in the Battle of the Atlantic or in the strategic air bombardment of northwest Europe. 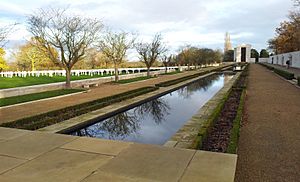 Reflecting pool leading to chapel, and memorial wall on the right.

Besides personnel of the United States armed forces there are also buried 18 members of the British Commonwealth armed services, who were American citizens serving chiefly in the Royal Air Force and Air Transport Auxiliary, besides an officer of the Royal Canadian Air Force and another of the British Royal Armoured Corps, whose graves are registered and maintained by the Commonwealth War Graves Commission.

In May 2014 a new visitor centre opened, containing exhibits about some of those individuals interred or remembered at the cemetery, and the wider World War II campaigns in which they were involved. 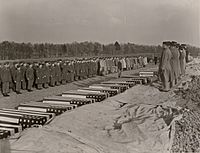 The memorial (including chapel)

The memorial building is 85 ft (26 m) long, 30 ft (9.1 m) wide and 28 ft (8.5 m) high; it is made of Portland stone; the doors of teak are embellished with relief models of World War II military equipment. The memorial is separated into a large museum room with a small chapel at the far end from the doors. A great map on the wall shows schematically the air sorties flown from East Anglia, together with convoys across the North Atlantic and other actions in the war. The wall and roof has a mosaic of angels and ghostly aircraft.

The architects of the site plan were Perry, Shaw, Hepburn and Dean, while the landscape architecture was arranged by the Olmsted Brothers company.

All content from Kiddle encyclopedia articles (including the article images and facts) can be freely used under Attribution-ShareAlike license, unless stated otherwise. Cite this article:
Cambridge American Cemetery and Memorial Facts for Kids. Kiddle Encyclopedia.