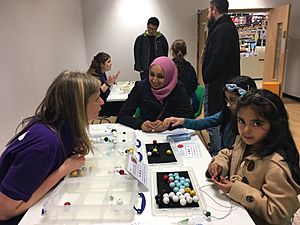 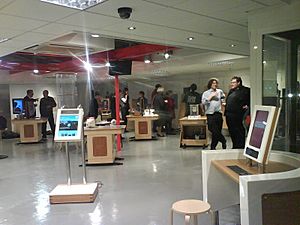 The start-up exhibition space was opened by the Vice-Chancellor of Cambridge University, Leszek Borysiewicz, on 7 February 2013, the museum was opened to the public on 8 February 2013. Its first exhibition dealt with the electromagnetic spectrum and principles of sound and hearing. Its target audience is families and schools, particularly children between 7 and 14 years old.

In December 2016, the exhibition space was closed for relocation. While they were relocating, Cambridge Science Centre put on a series of pop up science events known as 'Street Science'. 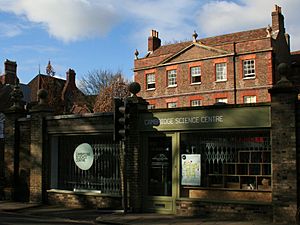 All content from Kiddle encyclopedia articles (including the article images and facts) can be freely used under Attribution-ShareAlike license, unless stated otherwise. Cite this article:
Cambridge Science Centre Facts for Kids. Kiddle Encyclopedia.