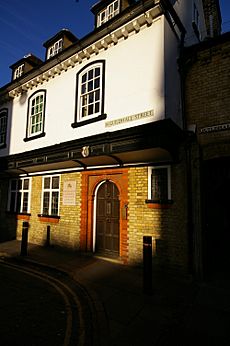 Fisher House, home of the chaplaincy since 1924.

The Cambridge University Catholic Chaplaincy, known as Fisher House after its patron, English martyr and Cambridge chancellor St. John Fisher, is the Catholic chaplaincy for members of the University of Cambridge in England. Founded in 1896, it is now located on the site of a former inn on Guildhall Street in the centre of Cambridge. From September 2020, the acting chaplain has been Fr. Robert Verrill OP, initially filling for the sabbatical of Mgr. Mark Langham, who died in January 2021. The assistant chaplains are Sr. Ann Swailes OP and Fr. Chase Pepper CSC. 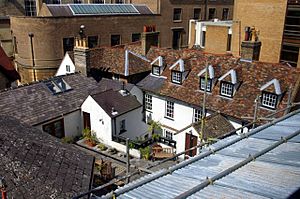 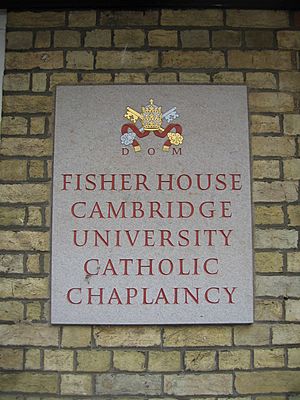 Plaque by the entrance

The chaplaincy is open to all Catholic members of the University, from undergraduates to fellows. Approximately 500 people attend the three Sunday Masses (a said English vigil Mass, sung Latin Mass and sung English Mass), with 20–30 people attending daily. During the exam period, Lauds is also celebrated.

Regular events include the annual Fisher Mass (in recent years celebrated at Great St Mary's) and the Gilbey requiem, as well as the Fisher Society dinner, barbecue, and garden party at the nearby Dominican priory. Lunches are organised daily (excepting Sundays when tea is provided), as well as many parties and events throughout the term.

The chaplaincy provides weekly courses and discussion groups on bible study, theology, ethics, poetry, philosophy and others, as well as an annual series of Fisher Lectures. 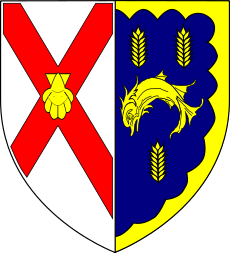 The chaplaincy borrows the arms of its patron, St John Fisher.

Oxford and Cambridge universities opened their doors to Catholics in 1871 after the repeal of the Test Acts. However, the Congregation for the Propagation of the Faith had decreed that it would be next to impossible for the ancient English universities to be frequented without mortal sin, stressing the dangers of an increasing atmosphere of liberalism and scepticism. This decision was met with public outcry from the wealthy laity, who wished for their sons to attend Oxbridge colleges. After a petition led by the Catholic Cambridge fellow Baron Anatole von Hügel, this ban was lifted in 1895 with the condition that a chaplaincy be established to provide teaching on philosophy, history and religion.

As a result of this, the Universities Catholic Education Board (later OCCEB) was founded and Fr. Edmund Nolan was appointed chaplain. At the same time, the Fisher Society was founded by Cambridge students as a literary and debating society. Henry Fitzalan-Howard, 15th Duke of Norfolk purchased property in Cambridge and the chaplaincy was established there at St Edmund's House in November 1886. The very first lectures were given by Cuthbert Butler, OSB, entitled "Questions of the Day".

In 1899, CUCA was founded in order to purchase rooms for the chaplaincy at 2 Green Street. From here, the chaplaincy would then move to Llandaff House, near Downing College, under Monsignor Arthur Barnes. After a brief closure during the war, Fr. Bernard Marshall became chaplain at 50 Bridge Street, and then 2 Round Church Street, next to the Union. 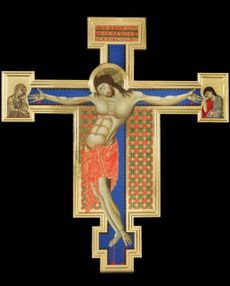 In 1924, a Grade II listed pub called the Black Swan was purchased by CUCA for £10,000. The chaplaincy was moved there and named Fisher House. An interesting cluster of buildings, two old houses, joined at right angles to each other. One (housing library incl. student bar and kitchen, studies) overhangs the street and is 16th century. The other (housing dining room, kitchens, great chamber, living quarters) is reached via alleyways and is early 17th century with medieval cellars. The Great Chamber on the first floor, well lit with oak beams and antique furniture, paintings and tapestry, is one of the most pleasant rooms in Cambridge. In 1998, Alfred Gilbey, a previous chaplain who had worked to prevent Fisher House being demolished for development, was interred in the courtyard.

Fisher House was officially opened on 4 May 1925, the then feast of Blessed John Fisher. In 1937 the women's chaplaincy was founded at Lady Margaret House, but was not merged into Fisher House until 1966. Originally Mass was held in a chapel in an upper room, but in 1967 work was started on a new hall and side chapel.

The hall was originally rented out to market traders to provide income, but in 2008, after a successful appeal to raise £2 million, it became a permanent place of worship. This endowment fund included a personal donation of €3000 from Pope Benedict XVI, who had previously visited Fisher House to give a lecture in 1988 as Cardinal Joseph Ratzinger.

In 2005, a reconstruction of a c. 1280 Cimabue crucifix was commissioned from the Hamilton Kerr Institute by the then chaplain, Fr. Alban McCoy. This 2 m artwork was constructed according to contemporary medieval Italian methods, in particular those documented in Cennino Cennini’s c. 1400 work Libro dell’Arte. The crucifix was completed in March 2008, installed at Fisher House and consecrated by Cardinal Cormac Murphy-O'Connor.

All content from Kiddle encyclopedia articles (including the article images and facts) can be freely used under Attribution-ShareAlike license, unless stated otherwise. Cite this article:
Cambridge University Catholic Chaplaincy Facts for Kids. Kiddle Encyclopedia.