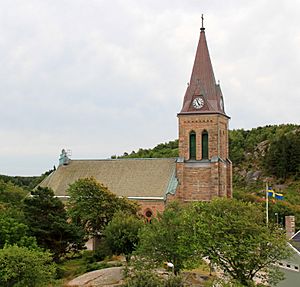 Fjällbacka in Sweden, the tiny seaside village where Läckberg was born

Jean Edith Camilla Läckberg Eriksson ( born August 30, 1974) is a Swedish crime writer. As of the early-2010s, her work has been translated into more than 40 languages in 60 countries. She has been called "the rock star of Nordic noir."

Läckberg considers herself a crime writing specialist since discovering such literature on her father's bookshelf at a young age. It has remained a fascination for her ever since. Läckberg's books have received special praise for detail and "in-depth characterization". Läckberg – sometimes called the Swedish Agatha Christie – became a writer after her husband and parents enrolled her in a creative writing course as a Christmas present. She describes herself as a visual writer: "For me actually, specific images – snapshots – come first, and then the story starts to come together from those bits and pieces. I am very visual when I write, I 'see' the story in pictures and writing a book is like having a movie running in my head 24/7." Her work has been described as standing "out for its atmospheric depiction of the Swedish coast, well-drawn characters and (at its best) complex and psychologically nuanced plots." In a review of her novel The Preacher (2012) by The Washington Post, the reviewer noted that the "clever plot and in-depth characterization aren’t the only qualities that elevate “The Preacher” above most other thrillers. There’s also an admirable feel for detail." In reviewing her most recent novel (The Golden Cage, 2020), The New York Times described it as a "smart, unflinching novel."

Läckberg was born in Fjällbacka, Bohuslän, and started writing at an early age. Her first published work was called "Tomten". After graduating from Gothenburg University with a degree in Economics, she moved to Stockholm, where she worked as an economist before beginning writing fiction seriously. She is a business partner in a jewellery company called Sahara Silver Jewelry AB. Hong Kong maternity fashion company Sono Vaso launched in Europe with the then-pregnant author endorsing.

Läckberg first married Micke Eriksson; they divorced in 2007. Under Swedish law, as Läckberg's ex-husband, Eriksson was entitled to half the revenue from the contracts signed during their marriage. Eventually it was agreed that she would pay him a lump sum.

Läckberg was married for the second time in 2010, to Martin Melin, winner of Expedition Robinson. The two had met at a 2005 release party for one of her books, then began a working relationship. Melin proposed to Läckberg in August 2009.

Camilla Läckberg has four children: Wille and Meja from her first marriage, Charlie from her second, and Polly is from her relationship with Sköld. Charlie is also the subject of his mother's first children's book, Super-Charlie.

Filming of the TV series Fjällbackamorden began in August 2011 based on the characters from Läckberg's novels, but the stories were new, with actors Claudia Galli and Richard Ulfsäter playing Erica and Patrik.

In 2013, a Swedish film directed by Per Hanefjord titled Tyskungen, and based on Lackberg's 2007's Tyskungen novel (translated into English as The Hidden Child) was released starring Claudia Galli in the role of Erika Falck.

All content from Kiddle encyclopedia articles (including the article images and facts) can be freely used under Attribution-ShareAlike license, unless stated otherwise. Cite this article:
Camilla Läckberg Facts for Kids. Kiddle Encyclopedia.