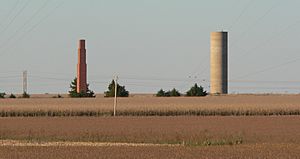 Chimney and water tower remaining at site of Camp Atlanta

During World War II, Camp Atlanta was established next to the town as an Allied Prisoner of War camp for German P.O.W.s. As with many prisoner camps, the site was chosen because it was located well into the interior of the United States. The site housed 3,000 German prisoners, most of whom had been captured in the North African Campaign, in three compounds.

The Atlanta area had been the final choice of the U.S. Army to establish a $2,000,000 P.O.W. camp after the outbreak of World War II. When construction began in September 1943, people were told this would be a "Conchie Camp" for the conscientious objectors from the United States. By November, it became known by locals that Atlanta would be a Prisoner of War camp expected to guard German prisoners. There were approximately 275 enlisted men and 60 officers.

The first 250 German prisoners arrived in December, unannounced to anyone but the officer in command at the camp. On a Saturday morning early in February 1944, 830 more arrived, making the total number of prisoners 1080. The camp had its own train stop across from the prison gates, a chapel, a theater, a hospital, post exchange, a bakery, a laundry, and repair shops for all purposes. A 12-piece drum and bugle corps made up from the military men marched in the Holdrege Memorial Day parade in 1944. A ball club was organized to compete with the nearby Indianola P.O.W. camp.

Prisoners were hired out to local farms to help retrieve the increased crop production demanded by the war. More than 30 local farmers sought assistance, paying the government for work completed by the P.O.W.s.

The American Legion Hall in Oxford, Nebraska was originally part of the post hospital at Camp Atlanta

Soon after the first of the year in 1946, after World War II ended, the government began shipping the prisoners back to their homes in Germany. Later in the year all, the frame buildings, plumbing and every sort of valuable material was stripped from the camp and sold at auction. By 1947, only acres of concrete slab, floors of barracks and other camp buildings remained. Some soldiers returned to live in Atlanta, and at least two of the Germans applied for U.S. citizenship and returned, as well.

Currently, the only remnants of the camp include the water tower and two chimneys.

All content from Kiddle encyclopedia articles (including the article images and facts) can be freely used under Attribution-ShareAlike license, unless stated otherwise. Cite this article:
Camp Atlanta Facts for Kids. Kiddle Encyclopedia.