The camp was closed and dismantled after the war and the site has been redeveloped for residential and commercial use, except for the Camp Chase Confederate Cemetery, which contains 2,260 graves of Confederates who died in captivity both in Camp Chase and in Camp Dennison near Cincinnati. Camp Chase was located in what is now the Hilltop neighborhood of Columbus, Ohio. Camp Chase is listed on the National Register of Historic Places.

Camp Chase was a Civil War camp established in May 1861, on land leased by the U.S. Government. It replaced the much smaller Camp Jackson. The main entrance was on the National Road 4 miles (6.4 km) west of Downtown Columbus, Ohio. Boundaries of the camp were present-day Broad Street (north), Hague Avenue (east), Sullivant Avenue (south), and near Westgate Avenue (west). Named for former Ohio Governor Salmon P. Chase, who was Lincoln's Secretary of the Treasury, it was a training camp for Ohio volunteer army soldiers, a parole camp, a muster outpost, and later a prisoner-of-war camp. The nearby Camp Thomas served as a similar base for the Regular Army. 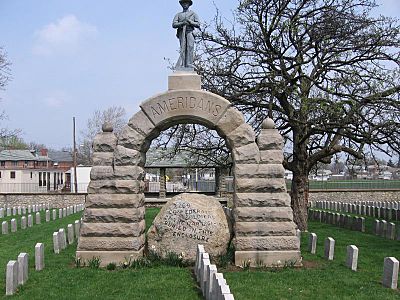 The camp was closed in 1865, and by September 1867, dismantled buildings, usable items, and 450 patients from Tripler Military Hospital (also in Columbus) were transferred to the National Soldier's Home in Dayton. In 1895, former Union soldier William H. Knauss organized the first memorial service at the cemetery. In 1906 he published a history of the camp.

The Memorial Arch was dedicated in 1902. From 1912 to 1994, the United Daughters of the Confederacy held annual services to commemorate Confederate soldiers who had been held and died there. The Hilltop Historical Society now sponsors the event on the second Sunday in June.

The Lady in Gray

The Lady in Gray is purportedly an apparition that haunts Camp Chase Cemetery. The story goes that the ghost is looking for her lost love, and cannot find him in the cemetery. The woman is described as young, in her late teens or early twenties, dressed entirely in gray, and carrying a clean white handkerchief. The legend of the Lady in Gray dates back to just after the Civil War, when visitors to Camp Chase spotted the woman walking through the cemetery, trying to read the carved names on the marked grave markers. She was seen quite often for several years, before disappearing completely.

Aside from the Confederate Cemetery, the land that formerly housed Camp Chase has been redeveloped as a residential and commercial area known as Westgate. A corner stone to the camp is located in front of the Westgate #623 Masonic Temple, in a community in the Hilltop section of west Columbus. This development was built in the late 1920s and early 1930s. The Camp Chase Site, including the cemetery, is listed on the National Register of Historic Places.

All content from Kiddle encyclopedia articles (including the article images and facts) can be freely used under Attribution-ShareAlike license, unless stated otherwise. Cite this article:
Camp Chase Facts for Kids. Kiddle Encyclopedia.