Kids Encyclopedia Facts
This page is about the prisoner-of-war camp. For the United States Army post, see Fort Bliss. 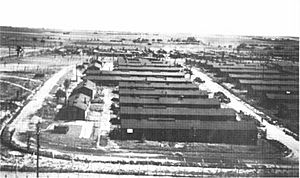 Camp Concordia was a prisoner-of-war camp that operated from 1943–1945. Its location is two miles north and one mile east of Concordia, Kansas. The camp was used primarily for German Army prisoners during World War II who were captured in battles that took place in Africa.

Camp Concordia was the largest POW camp in Kansas, holding over 4,000 prisoners The camp consisted of a complex of 300 buildings and was staffed by 800 United States soldiers.

The prisoners arrived at Camp Concordia by train. Authorities believed the soldiers could provide useful labor for agriculture, and, almost immediately, the Germans started working with local farmers.

At least two reported cases of executions are recorded, both were made by prisoners on fellow prisoners (some of whom were Gestapo agents). When conclusive evidence arose, the offenders were tried and sentenced to the federal penitentiary at Leavenworth.

"Difficulties between POWs and local residents were few, and in fact friendships formed", stated Lowell May, president of the camp's preservation society. "Only a handful of escape attempts occurred, none successful." Life at the camp was easy compared with the war in Europe. Prisoners played outdoor sports, listened to band performances and took courses offered by the University of Kansas.

The prisoners headed back to Germany in the autumn of 1945, some of them harboring pleasant memories of Kansas. Franz Kramer of Gundelfingen, Germany, said: "There was no reason to criticize American authorities. The prisoners felt that they were well treated. We learned a little of the American way of life and saw part of the vast country."

Once the POW camp closed, one of the buildings, Building T-9, was on a list acquired by the Federal Land Bank on June 7, 1947. In October 1947, the City of Concordia purchased 166.7 acres of camp acreage, including buildings, with the intent of establishing a park and re-locating the Cloud County fairgrounds to the site. Plans for the park never came to pass and the city eventually sold Building T-9 as well as other buildings and acreage. T-9 was subsequently used as a skating rink, hog farm, canoe factory, and during the 1960s, as storage for a horse racetrack called Thundercloud Park located on the camp property. 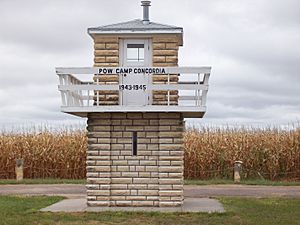 Several structures of the camp remain, including a prison warehouse used for storage, an officers club, and a restored guard tower. Only the guard tower is easily accessible to the public. The land is now used primarily for farming, although some houses have been built on the land as well. The original guard house remains and has been restored. Today, correspondence continues between former POWs, their relatives and Concordia residents.

Camp records have been transferred and maintained at the Cloud County Historical Museum in Concordia. On display at the museum are also many items of interest about Camp Concordia including several original paintings created by prisoners at Camp Concordia.

All content from Kiddle encyclopedia articles (including the article images and facts) can be freely used under Attribution-ShareAlike license, unless stated otherwise. Cite this article:
Camp Concordia Facts for Kids. Kiddle Encyclopedia.