It was added to the National Register of Historic Places in 2010.

Following the formation, by eight Harrisburg residents, of a Methodist Society in February 1889, that society's leadership founded a Sunday school on May 12 of that same year, and began providing spiritual education to 50 participants on a regular basis at a room above the Rife's & Reese's grocery store on Woodbine Street. To accommodate a growing congregation, the Rev. J.S. Wilcox spearheaded efforts to build a new chapel. The cornerstone for that new building was laid on May 11, 1890, and the building, officially known as the Curtin Heights Episcopal Church, was dedicated on December 1891 on the site of the long since demolished Camp Curtin, a major Union Army training camp during the American Civil War.

Two new wings were subsequently added to this chapel in 1893, but that expanded building lasted only a short time. Destroyed by fire on December 30, 1894, a new church was built by the congregation on the same site. Completed under the leadership of Dr. S. Fasick, its doors were open by July of 1895; it was then formally dedicated on December 15 of that same year.

The church's name was officially changed to Camp Curtin Memorial Methodist Episcopal Church by an amendment to the church's charter in September 1914. Later that same year, church leaders approved an expansion of the church, raised $38,000 in support of that effort, and rededicated the church as a memorial to all Civil War soldiers.

Urged in 1915 by the church's pastor, Rev. Alvin S. Williams, to continue expanding the church to accommodate a growing congregation, $60,000 was raised, and ground was broken on December 3, 1916 for a new sanctuary and auditorium with seating for 700. 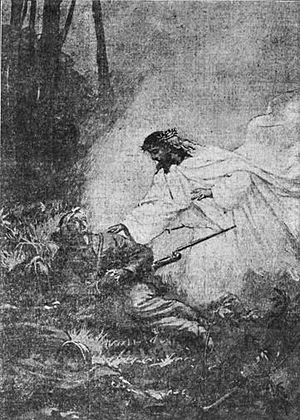 C. Day Rudy's mural of Christ with an American Civil War soldier which was painted for the Camp Curtin M.E. Church in Harrisburg, Pennsylvania ("Harrisburg Telegraph," May 27, 1916).

That same year (1915), a painting of Christ appearing to a dying soldier was commissioned by the church, and C. Day Rudy, a Civil War orphan, was chosen to create the allegorical work, which was dedicated on Memorial Day weekend that year (May 30, 1916). Rudy also then later crafted the stained glass Rose Window which has been preserved in the church's present-day sanctuary. In June, congregants petitioned the Pennsylvania Legislature to erect a monument near the church memorializing the site of the church as the site of the historic Civil War-era training camp mentioned above. The petition read:

"We, the undersigned, citizens of Harrisburg, Pa., the State of Pennsylvania to memorialize the Civil War recruiting camp, named in honor of the great War Governor, Camp Curtin, respectfully petition thee coming session of the State Legislature to procure the vacant plot of land located between Camp Curtin school building and the Camp Curtin Memorial Church on Sixth Street, Harrisburg, Pa., as a site for the erection of a worthy recognition in monument or if desired a statue.... We also ask the cooperation of all public officeholders of Harrisburg and Dauphin county and all patriotic societies and all political parties to help us in thus honoring the memory of our great War Governor and the 100,000 soldiers who, in the days of '61 and '65, went forth from old Camp Curtin to preserve the union."

That same year, beginning on December 3, 1916 and continuing for a week afterward, the church hosted as series of dedication events. On December 3, [t]hree of the biggest men in the Methodist Church world," Bishop W. F. McDowell of Washington, the Rev. Dr. John Krantz of New York City, and the church's district superintendent, the Rev. Dr. A. S. Fasick of Carlisle, officiated at the opening event with Fasick delivering the opening prayer and Krantz delivering the sermon during the morning service and afternoon Sunday school session, and McDowell and Krantz delivering addresses during the evening services.

Then, on December 6, a group of Civil War Veterans, Sons of Union Veterans, and veterans of other wars attended a special patriotic service at the church, which was "held in connection with the dedication of the new $60,000 edifice erected as a monument to Camp Curtin of Civil War days where 300,000 men were mustered into the service of the Union." The service was conducted after the veterans had marched to the church together. Local Grand Army of the Republic (G.A.R.) posts then presented an American flag to church leaders, followed by a presentation speech by Colonel H. C. Demming and an acceptance speech by David Cotterel. A formal address regarding the important role played by the recruitment and training camp during the war was then delivered to the audience by Professor Leon C. Prince, chair of the history department at Dickinson College. Following a performance by Estelle Butler of the Civil War-era song, "We Are Camping To-night," attendees dined on bean soup in the church's social room.

The formal dedication then concluded on Sunday, December 10 with a sermon by Bishop William Burt.

In 1917, the church hosted a performance by the Musical Art Society of Handel's Messiah in January, and also held a series of programs for Rally Day in September. Two years later, William R. Stonesifer was appointed as the church's organist and choir director.

The Camp Curtin Memorial Methodist Episcopal Church is a masonry constructed building faced with buff Holmesburg granite over brick in a Late Victorian / Romanesque style. The main church building holds one of the largest pipe organs in Harrisburg; it was designed and installed in 1917 by the M. P. Moller company.

The rear section of this church was built in 1895 as the congregation's primary place of worship. The cornerstone for a new, larger sanctuary was subsequently laid in the fall of 1915; that section, which was attached to the church's front on Sixth Street, was completed in 1916, and featured a high tower and belfry with parapets and pinnacles.

This church was added to the National Register of Historic Places in 2010.

All content from Kiddle encyclopedia articles (including the article images and facts) can be freely used under Attribution-ShareAlike license, unless stated otherwise. Cite this article:
Camp Curtin Memorial Methodist Episcopal Church Facts for Kids. Kiddle Encyclopedia.