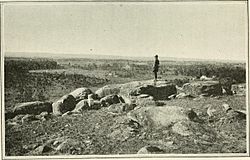 Overlooking Camp Curtain. In the distance are about 575 camp tents.

Camp Curtin was a military training camp in Harrisburg, Pennsylvania, during the American Civil War. It was the largest Union Army training camp during the war. There was also a supply depot, hospital and prisoner-of-war camp.

The news of the attack on Fort Sumter reached Washington, D.C. on April 14, 1861. President Abraham Lincoln called for 75,000 militiamen to serve for 90 days. These men were needed to put down the rebellion of the Southern states. In meetings across the North people cheered the flag and called those who seceded "traitors"! Across the North, eager volunteers responded to calls from local governmental officials to join newly raised state regiments. Governor Andrew Curtin of Pennsylvania issued a proclamation asking for 13,000 able-bodied Pennsylvania men to volunteer to help preserve the Union. Within three days, thousands of men had come to Harrisburg to enlist. But they had no place to organize or drill. Governor Curtin decided to use the County Agricultural Society in Harrisburg. Major Joseph F. Knipe officially opened the camp on April 18, 1861, and named it Camp Curtin in honor of the governor (the planned name had been Camp Union). By the end of April, it had sent 25 regiments into the field. From December 1861 to March 1862, the camp was commanded by Major Truman Seymour. In June and July of 1863, General Robert E. Lee invaded Pennsylvania for a second time. His target was Harrisburg and Camp Curtin. However, before he could get there, an accidental meeting between Confederate and Union troops started the Battle of Gettysburg. After the battle Lee's army retreated back to Virginia.

Over 300,000 soldiers passed through Camp Curtin, making it the largest army training camp during the Civil War. Harrisburg's location on major railroad lines running east and west, and north and south. This made it a very good location for moving men and supplies to the armies in the field. In addition to the Regular Army and Pennsylvania regiments, troops from Maryland, Michigan, Minnesota, New Jersey, New York, Ohio and Wisconsin used Camp Curtin. The camp and surrounding area also saw service as a supply depot. There was a hospital as well as a Confederate prisoner-of-war camp. At the end of the war, Camp Curtin was used as a mustering-out point for thousands of troops on their way home. It was officially closed on November 11, 1865.

All content from Kiddle encyclopedia articles (including the article images and facts) can be freely used under Attribution-ShareAlike license, unless stated otherwise. Cite this article:
Camp Curtin Facts for Kids. Kiddle Encyclopedia.