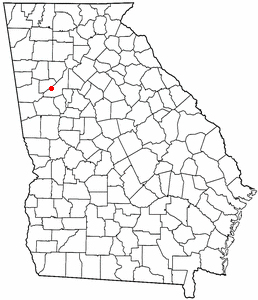 Campbellton is an unincorporated town in southwestern Fulton County, Georgia. It was the original county seat for Campbell County, Georgia until after it refused to allow the Atlanta & West Point Railroad line though, on account of the anticipated noise. The county seat and business activity shifted to nearby Fairburn which grew, and Campbellton's population dwindled. Campbell County then became part of Fulton as of 1932.

All content from Kiddle encyclopedia articles (including the article images and facts) can be freely used under Attribution-ShareAlike license, unless stated otherwise. Cite this article:
Campbellton, Georgia Facts for Kids. Kiddle Encyclopedia.