Campion Hall is one of the Permanent Private Halls of the University of Oxford in England. It is run by the Society of Jesus and named after St. Edmund Campion, a martyr and Fellow of St John's College, Oxford. The Hall is located on Brewer Street, between Christ Church, Oxford and Pembroke College, Oxford. The buildings, along with many of the fixtures and fittings, were designed by Sir Edwin Lutyens: his only buildings in Oxford. The Hall also houses an extensive and important collection of religious art, spanning 600 years; the pieces were collected primarily by Fr. Martin D'Arcy in the 1930s.

The origins of Campion Hall began on 9 September 1896 when Fr. Richard Clarke, who was a former member of St. John's College, Oxford, opened a Private Hall called 'Clarke's Hall'. He was sent by his superiors from the Church of the Immaculate Conception, Farm Street in London to St. Aloysius Church in Oxford to set up a hall for Jesuit undergraduates. He founded a small house at 40 St Giles', Oxford, and was the first Master of the hall. On 10 September 1896 the hall had its first four students. The hall allowed Jesuits to study for degrees from the University of Oxford.

The rented accommodation that was originally used was too small and 15 months later the hall was moved to Middleton Hall at 11 St. Giles', this was leased to the Society of Jesus until 1936.

Fr. O'Fallon Pope was succeeded by Fr. Charles Plater, and the hall again changed its name, this time to 'Plater's Hall'.

In 1918, the hall was granted permanent status and changed its name to Campion Hall after St. Edmund Campion, an English Jesuit and martyr who had been a Fellow at St. John's College. Permanent Private Halls (PPH) within the University of Oxford were established for the reception of students on the condition that they are not for purposes of profit. As well as Campion Hall, the other Permanent Private Halls at the time were St. Benet's Hall and St. Peter's Hall.

In 1921 Fr. Plater died and Fr. Henry Keane was appointed Master of Campion Hall, until his retirement in 1926. He was succeeded by Fr. Ernest G. Vignaux, who was Master until 1933. At that time, there were plans for the building of a new hall in St. Giles'. He was succeeded as Master by Fr. Martin D'Arcy till 1945.

In 1933, when Fr. D'Arcy became Master, the lease of the St. Giles property had only three years to run, so in 1935 a project of building in St. Giles was dropped and a new home was found in Brewer Street. The properties in St. Giles's were subsequently sold to St. John's College. 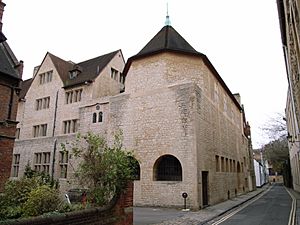 External view of Campion Hall with the chapel (right), from Brewer Street.

Brewer Street, also known as 'Sleying Lane' was occupied in the medieval period by brewers and butchers. There is a long history of brewing in Oxford. Several of the colleges had private breweries, one of which, Brasenose College, survived until 1889. In the 16th century, brewing and malting appeared to have been the most popular trades in the city. By 1874 there were nine breweries in Oxford and 13 brewers' agents in Oxford shipping beer in from elsewhere, Brewer Street was no exception.

At Brewer Street, Campion Hall bought two buildings, one a large and ancient lodging house, known as 'Micklem Hall', which in the past belonged to Hall's Brewery. It was owned by a brewer named Micklem (1820–70). The second building was a garage which had once been the stables for the horses which pulled the Oxford trams. The garage was demolished, as well as some of the rooms of Micklem Hall, with others incorporated into the new building.

The new building was designed by Sir Edwin Lutyens and completed in 1936. The building was Grade II* listed in 1954. It is the only building in Oxford designed by Lutyens, although in 1928 he did design the fountain in Tom Quad at nearby Christ Church. The style of Lutyens's exterior has been compared to 17th-century Cotswold architecture. The chapel has a semi-circular apse with a baldachin, and Lutyens provided chapel light fittings having red tassels like those on a cardinal's hat.

From 1912, Lutyens laid out New Delhi as the new capital of India. He devised an architectural Delhi Order there, with small bells hanging from the capitals of the columns, and subsequently made use of it in his design for Campion Hall, including in the columns supporting the baldachin in the chapel.

Fr. D'Arcy continued as Master of Campion Hall until 1945, when he was succeeded by Fr. Thomas Corbishley.

Campion Hall is run by the Society of Jesus and gives lodging to the Jesuit academic community within University of Oxford. It is a Permanent Private Hall whose members possess the same privileges as members of colleges. It has an international student body including not only Jesuits, but also priests of other Roman Catholic orders and congregations. Admission is usually only open to clergy, although sometimes exceptions are made for laymen.

Members of the Hall are entitled to invite guests for a meal (so-called Guest Night). There are common tables at which Fathers, students, and guests can sit freely.

In 2011, a painting "The Crucifixion of Jesus" which had been hanging in a hall of Campion Hall was thought to have been a long-lost Michelangelo masterpiece worth £100 million. The painting was bought by Fr. Martin D'Arcy when he was Master of Campion Hall at a Sotheby's auction in the 1930s. Some experts argue that the painting dates from towards the end of Michelangelo's life when his eyesight was failing, so is more likely to be a painting by Marcello Venusti.

The painting was removed from its position on a wall in Campion Hall and sent to the Ashmolean Museum for safekeeping.

The current Master of Campion Hall is the Rev. Dr. James Hanvey SJ.

All content from Kiddle encyclopedia articles (including the article images and facts) can be freely used under Attribution-ShareAlike license, unless stated otherwise. Cite this article:
Campion Hall Facts for Kids. Kiddle Encyclopedia.