The Canadian Grain Elevator Discovery Centre is a set of restored grain elevators located in Nanton, Alberta, Canada. The centre's goal is to preserve examples of old grain elevators to educate visitors about the town's, and Alberta's, agricultural history. 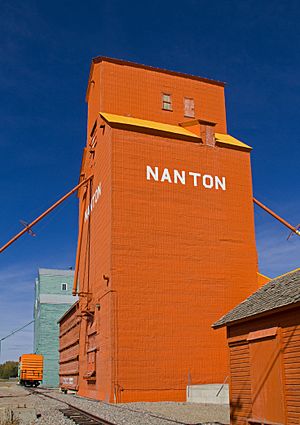 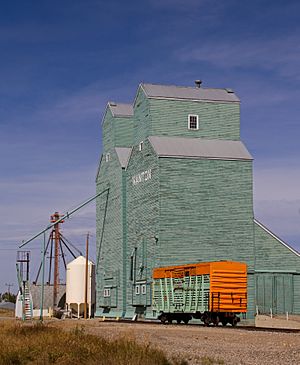 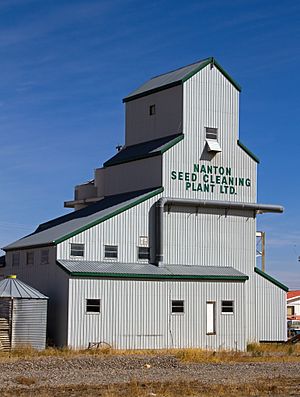 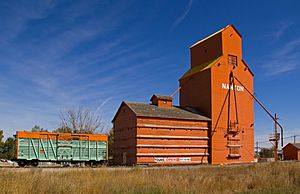 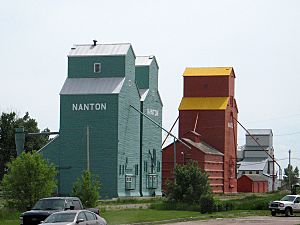 Elevators taken from the north.

In 2001 the last of Nanton's grain elevator row was threatened by demolition because of recent abandonment of the Canadian Pacific Railway that the elevators stood next to. Many worried citizens in and around the town of Nanton had realized that a part of the town's and province's history was about to be torn down and lost forever.

The concerned citizens of Nanton had rallied together and formed a Historical Society appropriately named "Save One". Of course the original goal of the save one effort was to do just that, save one, but before anything could be done to save the elevator the Society had to gain full title to the land and buildings. Which was a big undertaking that would take three years to achieve. With so many volunteer hours from many local businesses and citizens, the Society was so successful that not only did they end up saving just one elevator, but all three remaining elevators. Many donations from members and surrounding farmers-ranchers, have been made and have helped in replacing the railway tracks next to the elevators the completion of many of the repairs and restorations that needed to be done on the elevators. Including painting the former Alberta Wheat Pool back to its original green and the former Pioneer elevator back to the original orange & yellow.

Included in the row, but not a part of the Elevator Discovery Centre is the Nanton Seed Cleaning Co. elevator which is a smaller elevator.

All content from Kiddle encyclopedia articles (including the article images and facts) can be freely used under Attribution-ShareAlike license, unless stated otherwise. Cite this article:
Canadian Grain Elevator Discovery Centre Facts for Kids. Kiddle Encyclopedia.